Tigers’ Hamblin named WHL On the Run Player of the Week 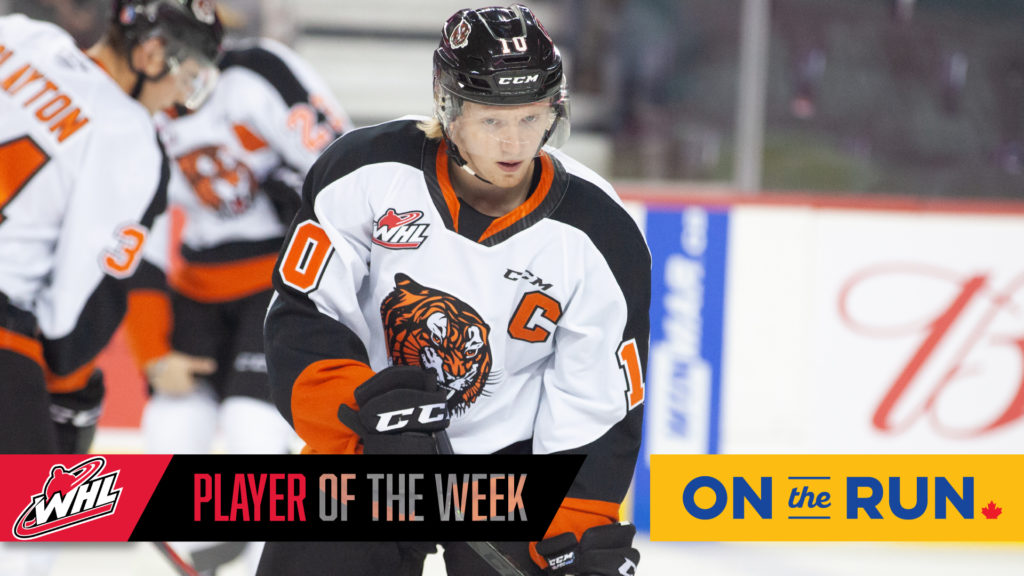 Calgary, Alta. – The Western Hockey League announced today that Medicine Hat Tigers captain James Hamblin has been named the WHL On the Run  Player of the Week for the week ending October 13, 2019.

Hamblin recorded seven points (2G-5A) and a plus-seven rating in three wins for the Medicine Hat Tigers this past week. The performance helped the Tigers open up a six-point lead on the Calgary Hitmen for second place in the Central Division, also placing them two points behind the division-leading Edmonton Oil Kings.

The Tigers’ week began with a 4-2 win against the Portland Winterhawks Tuesday, which saw Hamblin record a goal and an assist. Hamblin followed that up with a pair of assists in a 5-2 win over the Winnipeg ICE Friday.

Hamblin saved his best performance for last, potting a goal and three points in a 9-1 win over the Red Deer Rebels Saturday. The game featured the 11th short-handed goal of Hamblin’s WHL career as the Tigers once again surged offensively. Hamblin was also named the second star of the game.

The 5-foot-10, 181-pound product of Edmonton, Alta. now ranks in a tie for the WHL scoring lead with 14 points (5G-9A) through 10 games. Those figures include one short-handed goal and one game-winning goal. Medicine Hat originally chose the 20-year-old with the 17th-overall selection of the 2014 WHL Bantam Draft.