TIGERS HANG ON FOR 3-2 VICTORY OVER PRINCE ALBERT 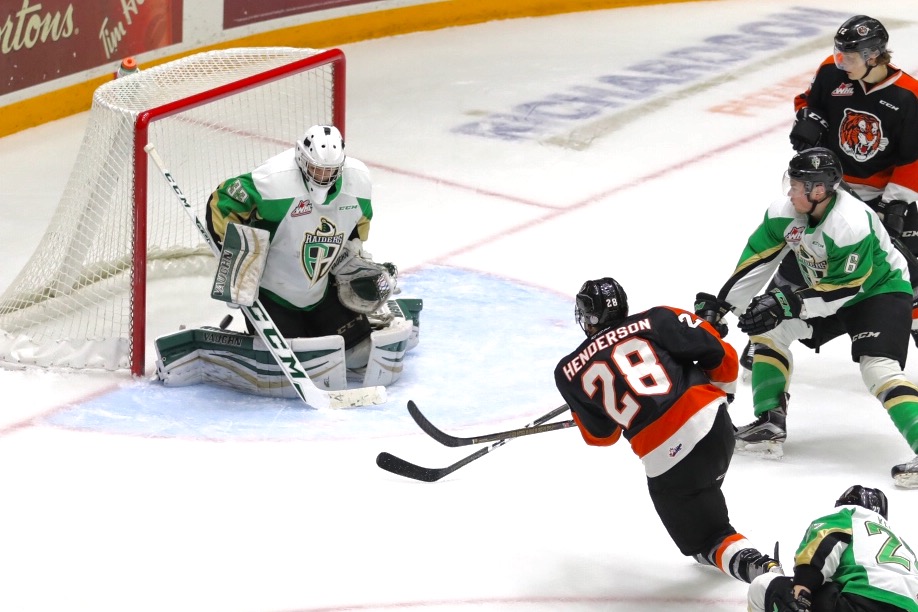 Medicine Hat, AB — It was another grind for the Medicine Hat Tigers who stuck out 2 days in Cranbrook and managed to arrive in time to play the visiting Prince Albert Raiders Wednesday night at the Canalta Centre. The Raiders had been on a small roll winning 3 of their last 5 games heading into the contest, a good feat for a team who just recently picked up their 10th win on the year. Medicine Hat held off the Raiders attack and found themselves 3-2 victors in front of a decent crowd.

It wasn’t the start the Tigers wanted on Wednesday as the Raiders got on the board in the first 10 minutes of the game. Tim Vanstone buried his 8th of the season off a deflected puck which was shot on goal by newcomer Curtis Miske. Miske’s shot was blocked by a Tigers defender but went right to the stick of Vanstone who caught Michael Bullion out of position and found the back of the net. Overall the period was a quality one for Medicine Hat as they had numerous quality chances but still trailed 1-0 after 20 minutes.

The second period was dominant by Medicine Hat as they looked to grab a strangle hold on the momentum. They needed the next break to go their way in order to see some light at the end of the tunnel. Mason Shaw delivered that light with his 21st on the season extending his league best point streak at the same time. Shaw scored on the power play to knot things up giving the assists to Max Gerlach and Mark Rassell. Before the period closed Jordan Henderson continued his career season with the Tigers netting his 4th of the year as Shaw found a pinching Henderson who put it short side on Ian Scott for a 2-1 lead heading to the third.

The final frame started as a chess match with both team not willing to give an inch knowing the next goal was crucial to the game. Medicine Hat did a good job stepping up on the Raiders forwards in the neutral zone, not allowing them to gain access to their zone. Medicine Hat battled a bouncing puck in the period but found that critical goal early with Zach Fischer’s 27th of the season. Fischer got the puck from Chad Butcher and entered the zone, he was pressured to the corner by the Raiders defender. That pressure didn’t phase the 19 year old who somehow found a hole on Scott and roofed it short side for a 3-1 lead. The remainder of the period was tense as Prince Albert attempted to battle back. They succeeded with under 3 minutes to go as 4 on 4 quickly turned to a 5 on 4 with the Raiders pulling the goaltender in favor of the extra attacker. Prince Albert scored on a similar play to their first goal, this time it was D-Jay Jerome who potted his 6th of the year. A final flurry from the Raiders was turned aside by Bullion and the Tigers as the buzzer sounded giving Medicine Hat the 3-2 victory.

Medicine Hat will hit the road, travelling down highway 1 to visit Calgary in a divisional battle Friday. Saturday’s game will be played back at the Canalta Centre in a huge Central Division match up with the Lethbridge Hurricanes.