TIGERS HANG ON FOR 5-4 VICTORY IN CALGARY 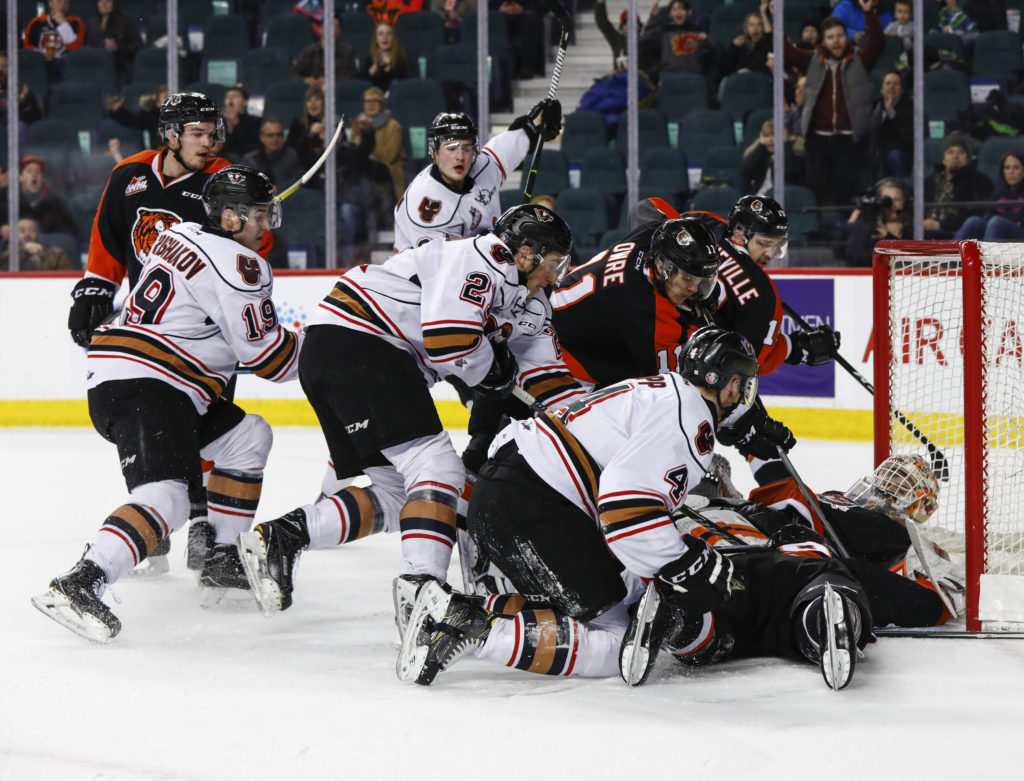 Calgary, AB — It wasn’t the start the Medicine Hat Tigers were looking for against the Calgary Hitmen Friday night as they travelled to the penalty box 4 consecutive times, allowing the Hitmen to jump on back to back 5 on 3 power plays. Fortunately for the Tigers, Calgary only would bury once, a goal from Jakob Stukel, his 19th of the season and an early 1-0 lead. Medicine Hat would push back and climb back into the game scoring three times in the period.

Steven Owre scored first for the Tigers notching his 21st of the season finishing a nice passing play from linemates Chad Butcher and Zach Fischer. Brad Forrest was welcomed home by scoring his 2nd of the season pinching in from the far side. Fischer found Forrest coming in off the wing and one timed the puck past Calgary goalie Kyle Dumba. Owre would end the period with his second of the game as the Owre line was buzzing all night long, Owre came close to scoring a hat trick in the period and throughout the game but would settle for just 2 markers. Medicine Hat took a 3-1 lead heading into the break.

The Tigers would give up the first goal in the middle period as Stukel was on the receiving side of a nice patient play from defenseman Brady Reagan. Reagan got the puck at the top of the blue line and pulled Tigers goaltender Nick Schneider out of his crease expecting the big shot. Reagan passed to Stukel and he made no mistake for his 20th of the year. Moments later Tyler Preziuso would notch his 4th of the season as his line of Ryan Chyzowski and Ryan Jevne forced a turnover to create a 4-2 lead. The back and forth affair in the period continued as Andrei Grishakov scored his 8th of the year. His goal was countered by Mason Shaw’s 24th of the season and gave the Tigers their 5-3 lead back heading into the intermission.

The third period was up and down for the Tigers. Medicine Hat was on their heels for some shifts but also would carry the play. Calgary was trying to force overtime for the 4th time out of 5 games and continue their unbeaten streak to six games. However Medicine Hat played a solid defensive game and got a good performance from Schneider as he stood tall turning aside 33 of 37 shots his way. Calgary would get a late marker with 22 seconds left in the game, but the Tigers would prevail and picked up the 5-4 victory.

The Tigers come home Saturday night as they raise the banner and retire the number of the late Tom Lysiak as the Brandon Wheat Kings come to town.