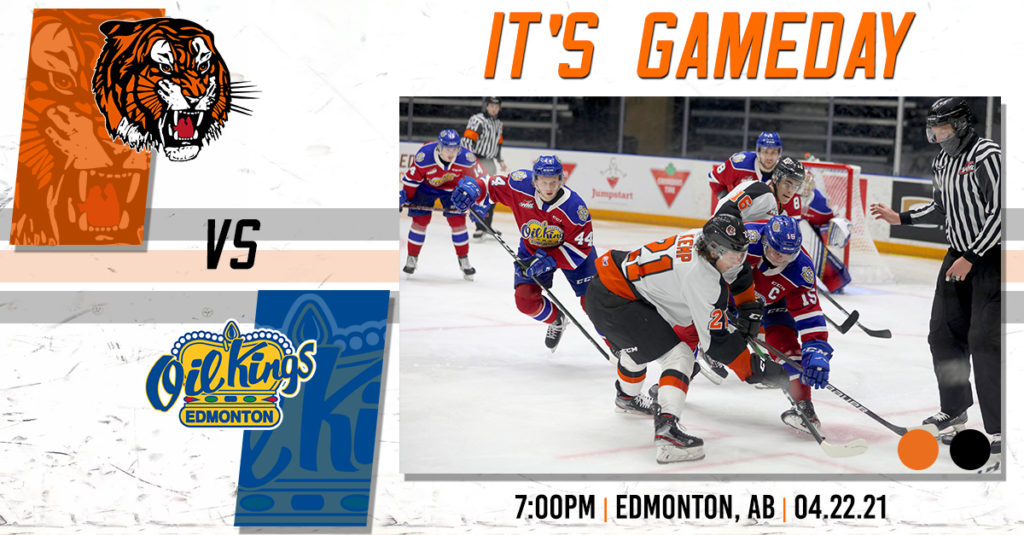 The Story Coming In
The Medicine Hat Tigers are coming off three straight wins over the Red Deer Rebels. The Tigers fell behind by a score of 2-0 in the first two contests of the three game set, but were able to rally back from each deficit and come away with 4-2 and 5-2 wins. The Tigers completed the sweep on what would be an historic night as Head Coach Willie Desjardins recorded career win 376 to move him into first place all time in the wins category as a head coach for the Tigers. Offensively, the Tigers were lead by Corson Hopwo who recorded 3 goals and Brett Kemp who registered 1 goal and 4 assists.

The Edmonton Oil Kings took five of six possible points off the Lethbridge Hurricanes last weekend, shutting out the ‘canes 4-0 in game, falling 6-5 in a shootout on Saturday, then dropping Lethbridge by a score of 5-3 at the Enmax Centre in the windy city. Sebastian Cossa is 12-0-0-1 on the campaign and earned his second shutout of the season and improved his stat line to a gaudy 1.61 GAA and a 0.939 SV%. Carter Souch had six points in the series vs the Hurricanes notching 2 goals and 4 assists.

Tigers vs. Oil Kings
This will be the third meeting of the season between these two teams, with the Tabbies falling by scores of 3-1 and 4-2 in the first two contests. While both of those games were two goal games, the games themselves were incredibly close with the Oil Kings taking full advantage of a Tiger miscue. The Tigers are currently 12-3-0-1 and sit 2nd in the Central Division, while the reigning Central Division Champion Oil Kings are 14-1-0-1 and sit in 1st place in the division. Both teams are neck and neck having gone 8-1-0-1 in the last 10 games. The Tigers powerplay has been simply devastating scoring 27 times in 60 chances (45%), while EOK has scored on 31.9% of their powerplay opportunities.

View from Edmonton
The Edmonton Oil Kings are looking to keep their momentum rolling as they have only had one loss in regulation time this season. Leading the charge offensively for the Oil Kings is Jake Neighbours. The Airdrie, AB product has registered at least a point in all 15 of the Oil Kings games he has appeared in this season, notching 26 points (6G, 20A. Dylan Guenther is 2nd on the team in scoring, but has since departed Edmonton to play for Team Canada at U-18 tournament which will take place in Plano, Texas from April 26-May 6. Jalen Luypen rounds out the top three for Edmonton with a team leading 12 goals and chipping in with 12 assists.

Tigers Talent
Medicine Hat Tigers forward Brett Kemp is doing whatever he can to help his team win games as we enter the stretch drive. The pride of Yorkton, SK currently has a 10 game point streak going where he has tallied 8 goals and 10 assists over that time frame. Kemp has overtaken Cole Clayton as the teams top point getter having now, with 10 Goals and 17 Assists in 16 games. Cowboy sits 2nd in team scoring with seven goals and 18 assists, while Captain Ryan Chyzowski sits in 3rd place (8G, 14A). Corson Hopwo (13G, 8A) and Lukas Svejkovsky (PIT) (9G, 9A) round out the top five for the Tabbies. Between the pipes, sophomore netminder Garin Bjorklund (WAS) is currently sporting a 2.55 GAA and a 0.915 SV% while his counterpart Beckett Langkow has a 2.94 GAA and a 0.922 SV%

Captain’s Corner
Returning to the Tigers for his overage season is first year Captain, Ryan Chyzowski. Chyzowski, a former 1st round bantam draft pick has played his entire career for the Tigers appearing in 273 regular season games for the Orange and Black. The Kamloops, BC native is third in team scoring with eight goals and 14 assists through 16 games this season. Chyzowski crushed his career best totals in 2019-2020, notching 34 goals and adding in 35 helpers for 69 points. Chyzowski is a high energy player with great hands and a dynamite shot.

Goals For Mental Health raises $19,455 as WHL players score in support of CMHA
7 hours ago