TIGERS HOLD ON 5-4 OVER EVERETT 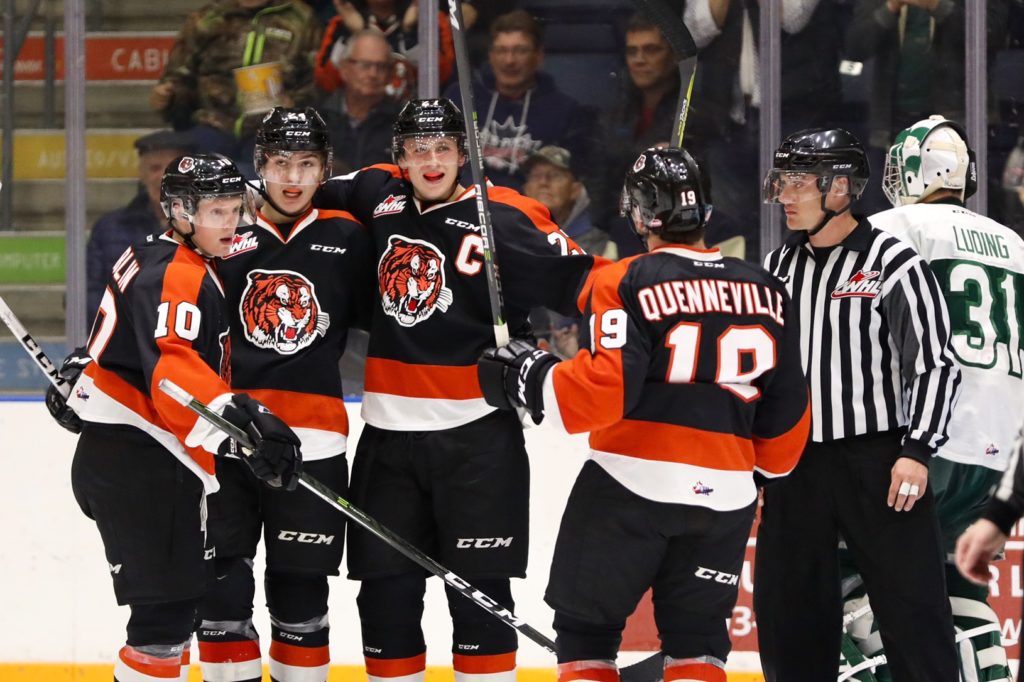 Medicine Hat, AB — The Medicine Hat Tigers were looking to get back in the win column after being defeated 6-1 by Prince Albert. Their opponent the Everett Silvertips were also looking for a win after losing their last two games on their current road trip. Michael Bullion would get his 4th start of the season for the Tigers. In goal for the Silvertips, it would be Kyle Dumba.

The Tigers got off to a quick start finding the back of the net twice just 2:02 into the game. First David Quenneville’s shot from the point found its way through past Dumba. Then Dawson Heathcote finished off the nice feed from Gary Haden for his 1st career WHL goal. That was enough for Kyle Dumba to get chased out of the net as Dorrin Luding came in relief, at 2:03 in the first period. With time winding down in the period the Silvertips found the back of the net. Michael Bullion made a great pad save on Orrin Centazzo, but Matt Fonteyne was on the doorstep to clean up the rebound making it 2-1. Medicine Hat responded just 12 seconds later. Ryan Chyzowski’s hard work on the forecheck got the puck out to Ryan Jevne who found Tyler Preziuso with 1 second left on the clock.  Shots were even at the end of the first period 13-13.

A back and forth battle took place in the middle period. Cole Clayton would take a slashing minor sending Everett to the man advantage. On the power play, Patrick Bajkov blasts one from the top of the faceoff circle zipping by Michael Bullion cutting the lead 3-2. Mark Rassell restored the tabbies lead back to 2 after his wrist shot beat Luding right over the glove. Gary Haden picked up his 2nd apple on the night on Rassell’s tally. The Silvertips wouldn’t go away though, as Brandson Hein on the wrap-around tucked the puck underneath Bullion’s pad cutting the lead to 4-3 lead for the Tigers after 40 minutes.

In the 3rd period, the Orange and Black would get their turn on the power play after Centazzo got caught for slashing. Mark Rassell capitalized on the Tigers 3rd power play for his 2nd of the game as he finished off the nice pass from Quenneville.  David Quenneville notched his 100th career WHL assist on Rassell’s powerplay marker. Montana Onyebuchi’s point shot found the back of the net making it a 5-4 game with just 5:34 left to play in the 3rd. Everett threw everything they had at the Tigers in the last few minutes looking for an equalizer goal. Michael Bullion and the defence would hold off the Silvertips flurry of chances, as the Tigers came away with a 5-4 victory.

The Tigers will battle the Saskatoon Blades on Friday, for their final game of this 5 game home stand, puck drop is at 7:30pm.