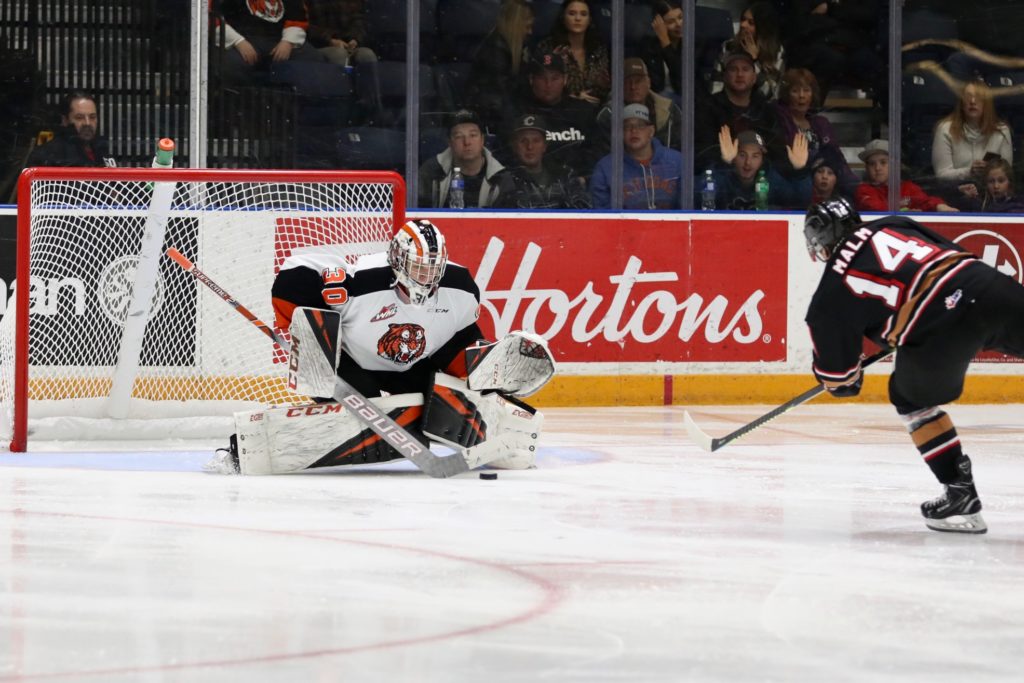 Early in the game, Van Impe dished the puck to Daniel Baker whose shot was redirected by Captain James Hamblin into the net to open the scoring. Hamblin’s goal was his 19th of the season.

Midway through the period while the Tabbies were on their first power play of the night, Jonathan Brinkman snapped the puck on net past Hitmen’s goaltender Brayden Peters to score his 7th goal of the season. Dylan Plouffe and Cole Clayton combined on the play.

Quickly after Brinkman’s power play goal, Cole Sillinger played the puck out of the Tigers’ end and it was collected by Ryan Chyzowski. Chyzowski carried it down the ice and played a beautiful pass across the ice to Brett Kemp who potted it in for his 16th goal of the season.

Midway through the second stanza, Josh Prokop was able to get one past Søgaard to get the visitor’s on the scoresheet but the Tabbies held on to win 3-1.

Peters stopped 27 of the Tigers’ 30 shots in tonight’s contest.

The Orange and Black are now 23-10-1-1 and they will travel to Calgary for an afternoon battle with the Hitmen on New Year’s Day. Afterwards, they will return home to host the Hitmen on Friday, January 3rd and the game will be a NewRock Developments Chuck a Puck Night. Tickets for the game can be purchased in person at the Canalta Centre Box Office or online.