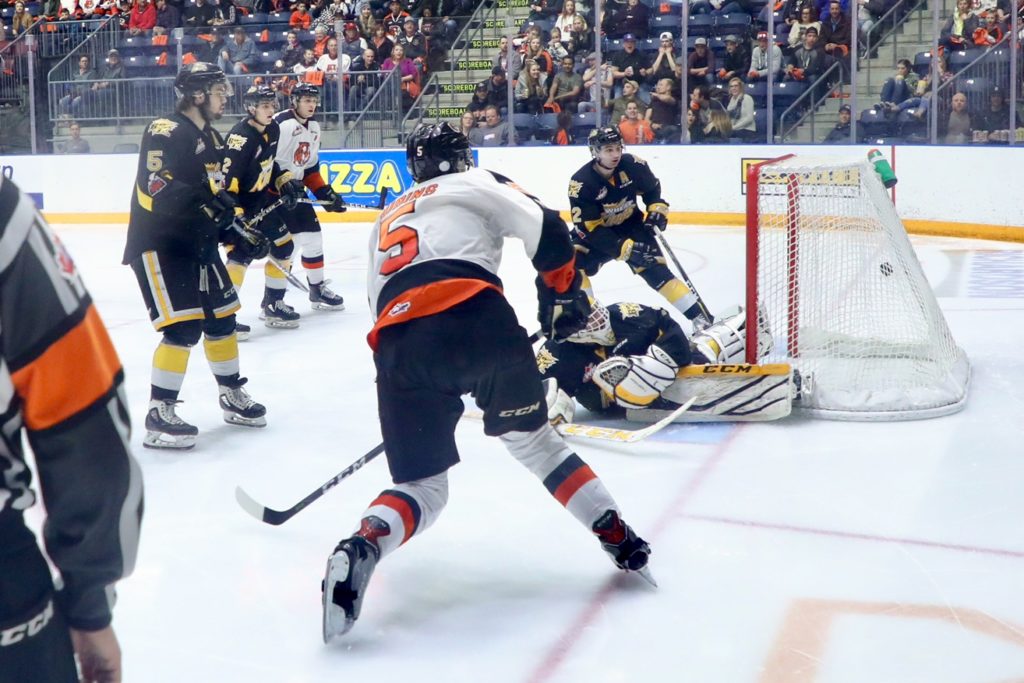 The Medicine Hat Tigers came out flying against the Brandon Wheat Kings in the first game of the opening round of playoffs, defeating the visitors 7-2.

Seven different Tabbies scored with veterans Mark Rassell and Kristians Rubins picking up a goal and two assists each. The Orange and Black scored six times on Wheat Kings goaltender Logan Thompson before he left the game midway through the second stanza.

The game begun with the Tigers and the Wheat Kings feeling each other out. Play was quiet and coast to coast, until midway through the first period when Wheat King Baron Thompson was sent off for kneeing. With the man advantage, the Tabbies power play moved the puck around beautifully for Rubins and Jaeger White to set Ryan Jevne up to score. Wheat Kings’ netminder Thompson was caught out of position as Jevne rifled his shot in.

Twenty-one seconds later, Cole Clayton pounced on the puck in the slot and buried it past Thompson to extend the Tigers’ lead and get the fans back on their feet. Dalton Gally and Henry Rybinski assisted on the play.

The momentum shifted in the Orange and Black’s favour and during their second power play of the night, Captain Rassell did what he does best, he scored. Rubins and Hayden Ositr combined on the play to set Rassell up to beat Thompson top shelf, blocker side.

Late in the first stanza, Wheat King forward Luka Burzan picked up a loose puck in the slot and fired it home to get the visitor’s on the board.

The Tigers went to dressing room leading 3-1 after 20 minutes of play.

Early in the middle frame while each team had a player in the box, Ryan Chyzowski muscled his way onto the puck and skated through a couple Wheat Kings before spinning in the slot and firing it in past Thompson to extend the Tigers’ lead even further.

Just over five minutes later, on the penalty kill, Rassell jumped on the loose puck and skated down the ice against a lone Wheat King defender only to dish the puck to teammate Gary Haden who shot a one timer from the slot to beat Thompson.

On a break out play a few minutes later, Elijah Brown fed a cross ice pass to Bryan Lockner who did not hesitate to bury it, giving the Tabbies a 6-1 lead and chasing Thompson from the Wheat Kings net. Before leaving the net, Thompson stopped 12 of the Tigers’ 18 shots.

Dylan Myskiw replaced Thompson at the 11:35 mark in the second period and went on to make 6 saves on 7 shots.

Early into the final frame, Lockner fed Rassell whose shot was steered aside by Myskiw. Rubins snapped up the rebound and fired it into the net to give the Tabbies a 7-1 lead.

In the dying minutes of the game, Wheat King defenceman James Shearer beat Tigers goaltender Jordan Hollett with a shot from the point on the power play to finish the game 7-2 in favour of the Orange and Black.

The Tabbies specialty teams played well going 2 for 4 on the power play and 6 for 7 on the penalty kill while Hollett stopped 32 of the Wheat Kings’ 34 shots.

The Orange and Black will host the Wheat Kings Sunday at the Canalta Centre for Game 2. The puck will drop at 6:00 PM.