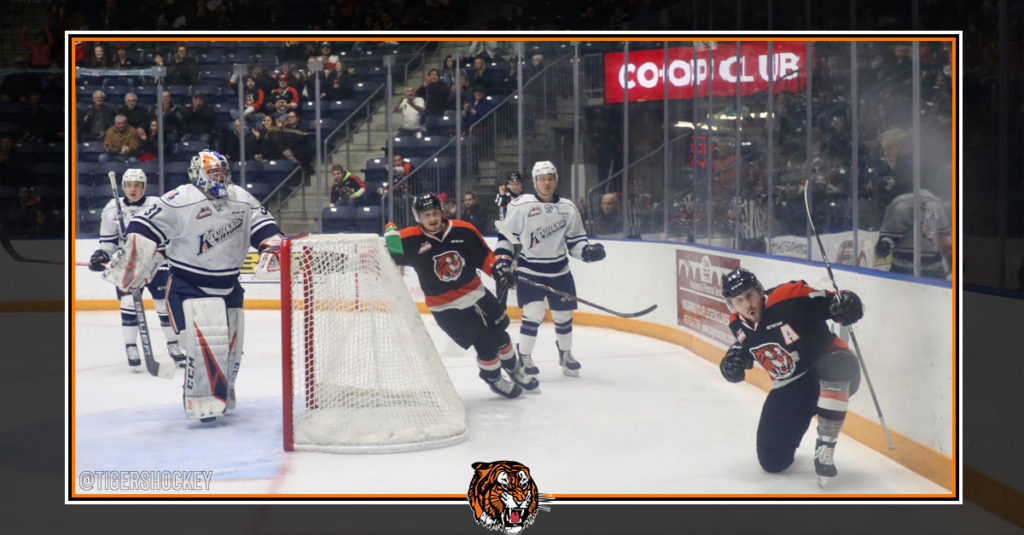 Ryan Jevne led the way scoring a pair of goals for the Tabbies including his 50th career goal. Wednesday’s game is the third game in a row the overage forward has scored two goals.

Jevne opened the scoring just over five minutes into the first period when he skated the puck from the Tigers’ end to the Blazers’ end and beat goaltender Dylan Ferguson glove side to score his 50th career WHL goal.

Midway through the frame, the puck came across the ice to Tyler Preziuso who did not hesitate to bury it into the back of the net. Preziuso’s 13th goal of the season was assisted by Corson Hopwo and James Hamblin.

The Orange and Black headed to the dressing room leading 2-0 after 20 minutes of play.

Early into the second stanza while on the penalty kill, Jevne flew up the ice to light the lamp for the second time. Jevne’s shorthanded goal was his 16th goal of this season.

The Blazers rallied late in the middle frame scoring a pair of goals. Connor Zary and Brodi Stuart mounted the comeback for Kamloops to make it a 3-2 hockey heading into the final period of play.

Just over six minutes into the third frame, Logan Christensen won the faceoff in the Blazers’ end. Daniel Baker picked up the puck and fired it into the net to score his second of the season and seal the 4-2 victory for the home team.

Mads Søgaard turned aside 36 of 38 shots faced while Ferguson stopped 31 of the Tigers’ 35 shots.

The Medicine Hat Tigers are now 16-14-1-2 and will travel to Red Deer Friday to face the 20-9-2-0 Rebels. After Friday’s contest, the Orange and Black will return home Saturday to host the Kelowna Rockets for their final game before the Christmas break. Saturday’s game will start at 7:30 PM and it is a NewRock Development Chuck a Puck night to benefit Medicine Hat Adaptive Sport and Recreation.