TIGERS LOSE 5-3 TO THE GIANTS 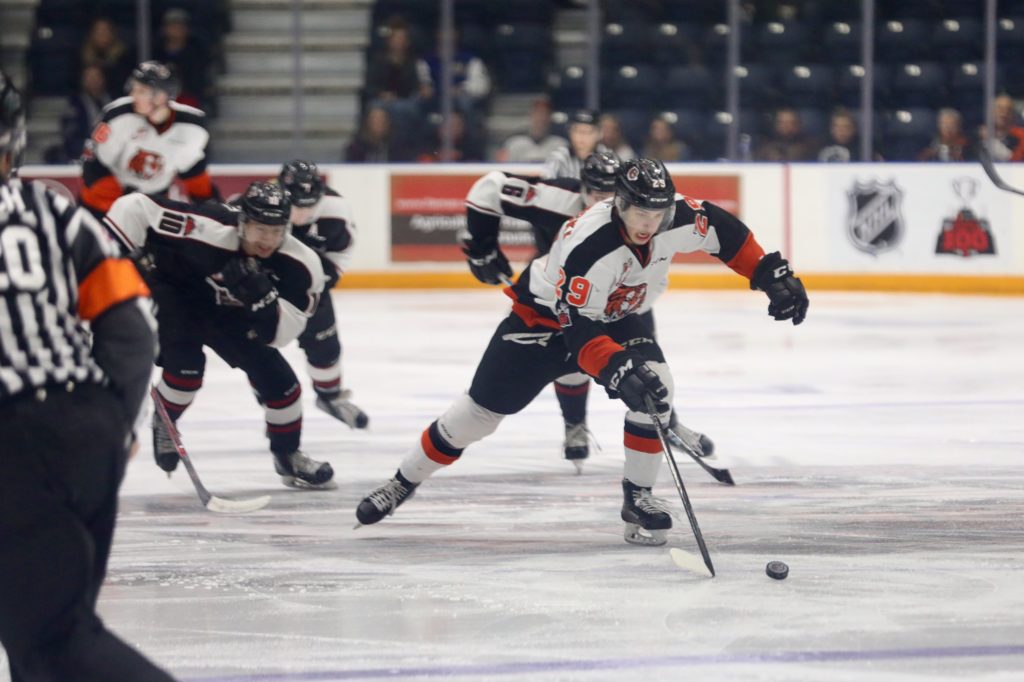 Two unanswered goals in the third period led to a 5-3 loss for the Medicine Hat Tigers to the visiting Vancouver Giants.

The Tigers and the Giants were tied 3-3 going into the final frame. Ty Ronning scored on the power play and Dawson Holt secured the victory for the Giants in a period that saw even chances between both teams.

Ryan Chyzowski and Tyler Presiuzo raced down the ice on a 2 on 0 early in the first frame with Presiuzo beating Giants goaltender Todd Scott shorthanded to give the Tigers the lead.

A few minutes later, Holt found the net for the Giants and the two teams headed to the dressing room tied 1-1 after 20 minutes of play.

Early into the second period, Chyzowski combined with David Quenneville and James Hamblin before beating Scott far side top shelf to give the Tigers their second lead of the game.

Midway through the middle frame, Darian Skeoch was sent to the penalty box to serve two penalties, one for cross checking and one for unsportsmanlike conduct. During the Tigers power play, Brayden Watts scored a short handed goal to give the Giants their first lead of the game and make it 3-2.

The Tigers continued to pressure the Giants on their power play and it paid off. Gary Haden redirected a shot from Jaeger White to make it 3-3. Kristians Rubins picked up an assist on the goal.

Despite having great chances in the final frame, the Tigers were not able to respond to either Ronning or Holt’s goals and the game finished 5-3 for the Giants.

The Tigers are now 22-16-3-0 and will depart on an Eastern road trip that will see them play 4 games in 5 nights, starting with the Saskatoon Blades on January 10th.