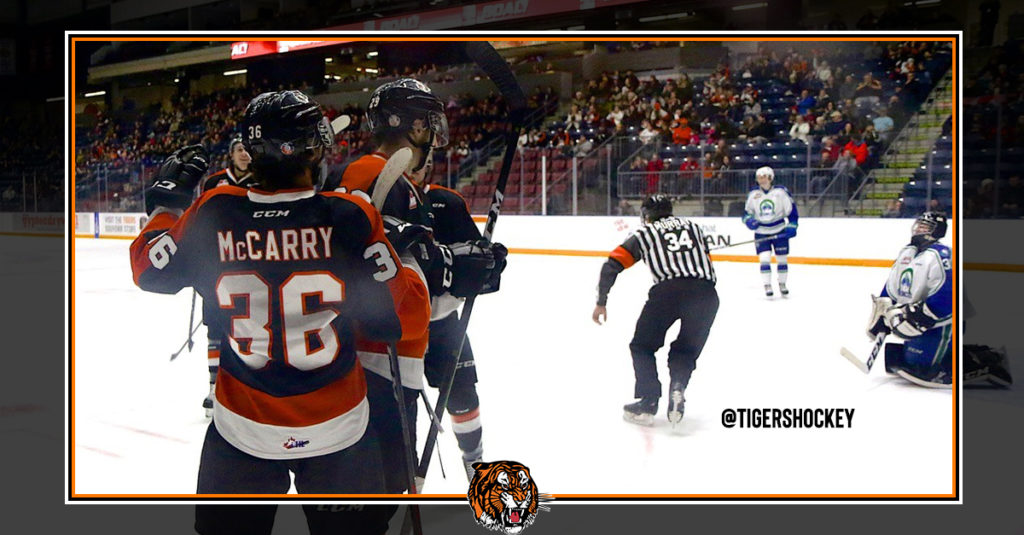 Medicine Hat, AB — The Medicine Hat Tigers came from behind to defeat the Swift Current Broncos 3-2 in overtime Saturday night.

Linus Nassen suited up for his 100th career WHL game and he scored the game-tying goal with less than a minute remaining in regulation. In his WHL career, the 20-year-old Norrtalje, Sweden native has 68 points (7G, 61A).

Veteran forward Ryan Chyzowski scored the game-winning goal just over a minute into overtime. Chyzowski also picked up an assist tonight and he now has four points (2G, 2A) in our last 2 games played.

The Tigers responded well by scoring a goal of their own less than a minute later. Hayden Ostir won a puck battle in the corner before Chyzowski set Nick McCarry up to score his 3rd goal of the season.

Early into the second stanza, the Broncos regained the lead when Tanner Nagel scored to make 2-1.

The tenacious Tigers continued to battle and late in the final frame, rookie goaltender Mads Søgaard left the net to give the home team an extra attacker. The man advantage paid off when James Hamblin set up Nassen’s game-tying goal.

Chyzowski’s game-winning goal in overtime was his 22nd of the season and it was assisted by Cole Clayton.

Søgaard stopped 21 of 23 shots faced while Broncos netminder Riley Lamb made 46 saves on the Tigers’ 49 shots.

The Orange and Black are now 32-25-3-2 and they will host the 34-22-5-1 Calgary Hitmen Wednesday, March 6th. The game will start at 7 PM and it is brought to you by House of Cars. The Medicine Hat Minor Softball Association will be in the Hut 8 Mining Community Corner.