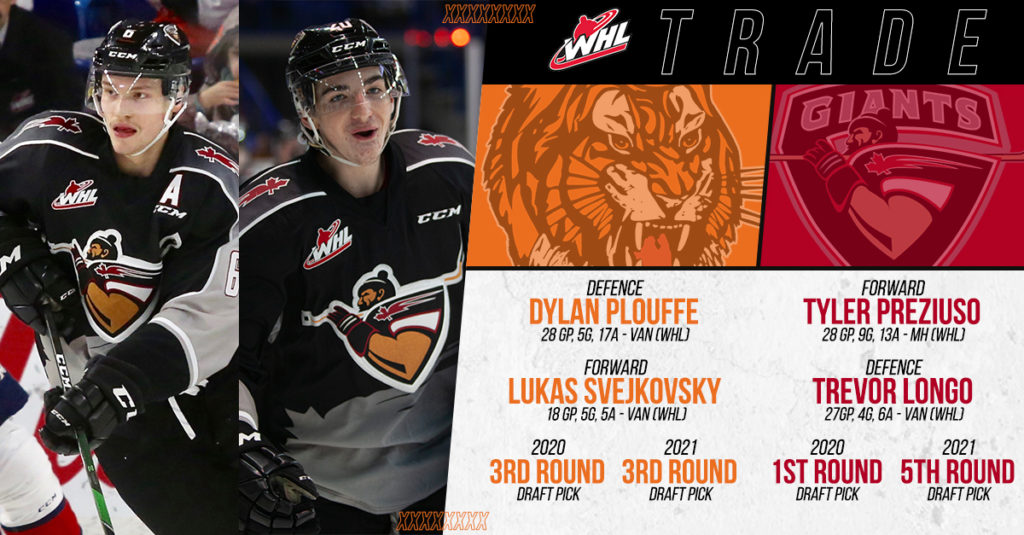 “We would like to thank Tyler and Trevor for their hard work and dedication to the Tigers Organization. Their parents should be proud of their work ethic and determination displayed,” said General Manager and Head Coach Willie Desjardins. “We didn’t want to move Tyler and Trevor but Vancouver was interested in both players.”

Preziuso was drafted in the third round, 61st overall in 2014 by the Tigers. In his WHL career, he suited up for 293 games, scored 55 goals and picked up 83 assists.

“We are excited for Dylan and Lukas to join the Tigers Organization. They are two players we were targetting and we think they will step in and be apart of our culture right away. They are both excellent offensive players who were key contributors on a team that went to the WHL finals last year. We are looking forward to working with them both,” said Desjardins.

Plouffe was drafted in the second round, 29th overall by the Giants in the 2014 bantam draft. In 272 games played for the Giants, the 20-year-old Sherwood Park native has 28 goals and 95 assists.

Svejkovsky was drafted in the second round, 36th overall by the Giants in the 2016 bantam draft. The 18-year-old Point Roberts, Washington product has 14 goals and 22 assists in 85 games played for the Giants.