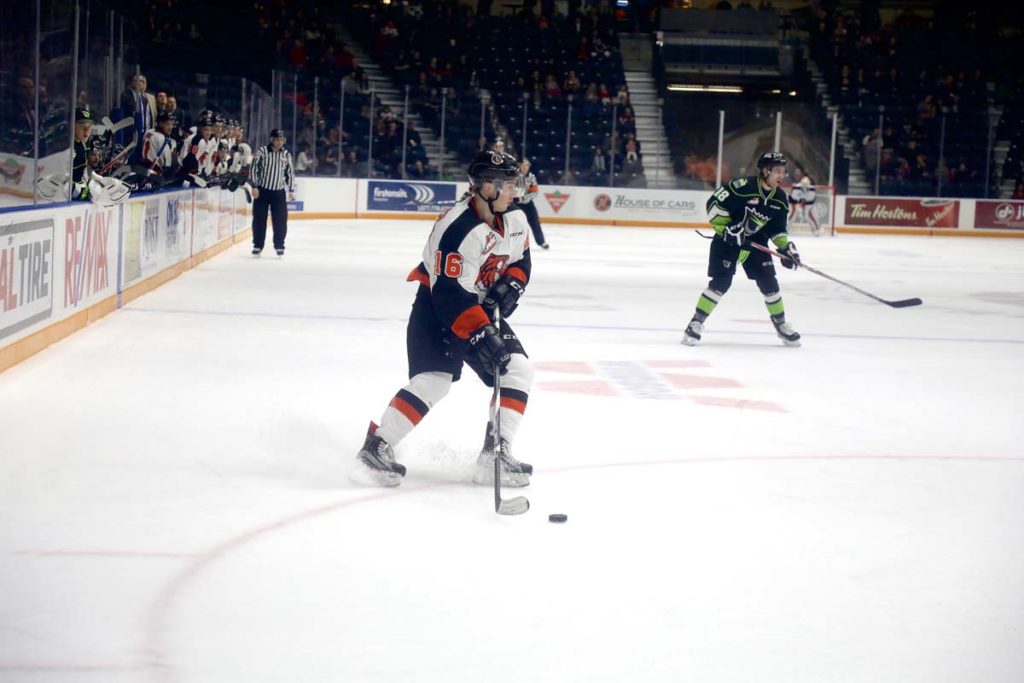 It’s a mantra heard up and down the Medicine Hat Tigers roster over the past season, and nearly a dozen at various NHL development camps are now reaping the fruits of their combined labour.

“It just shows how deep we were this year. It obviously explains why we were so good, but it’s partly because the team was so good that the players are getting to reap the benefits,” said Tigers forward Mark Rassell, a Calgary product who earned an invitation to Flames development camp after a 36-goal season in Medicine Hat. “It’s nice getting the opportunity after the season I had to get a look at a pro camp, especially with the hometown team. It’s an honour.”

Rassell was slotted in on Team Gelinas alongside Tabby teammate Zach Fischer — who was selected in the fifth round of this year’s draft at 140th overall — and playing against recently traded goaltender Nick Schneider on Team Conroy. While the trio is skating alongside some of the top talent in its age bracket, Rassell says he’s surprisingly unfazed.

“It’s truly eye-opening. Being so nervous coming into camp, because you put such a high value on pro players, you think they’re just going to blow you out of the water but you realize they’re just another hockey player,” said Rassell. “It’s an honour to be here, but once you’re here you realize how close you are.”

And he’s far from the only one. All three outgoing overage players earned invitations of their own. Captain Clayton Kirichenko earned an amateur tryout with the Los Angeles Kings, while Chad Butcher and Steven Owre are out to prove their worth with the Edmonton Oilers. Playmaker Mason Shaw started his camp with the Minnesota Wild on Thursday alongside former teammate Matt Bradley, and sniper Max Gerlach is coming off a strong outing with the Arizona Coyotes after going overlooked at the draft.

“I’m going back there in September to participate in their rookie showcase. When you hear news like that, I think I must have made an impression just being an invited guy at camp,” said Gerlach, who found the net 34 times last season. “I got a lot of great feedback in my exit interview in regard to what they thought of me, how I played at their camp and my skill set, so it was nice to hear that.”

Out on the East Coast, defensive standout David Quenneville just closed out another opportunity with the New York Islanders after going 200th in last year’s draft, while Swedish forward John Dahlstrom — who recently signed a deal to play in Sweden next season — will return to the Windy City for another chance to make an impact with the Chicago Blackhawks at their prospects camp later this month.

“That’s what you look for. In junior you want to make the jump to pro so it’s exciting that so many guys on our team are having success,” said Rassell. “Every guy is getting an opportunity right now and more guys are going to get looks next season.”

The list keeps growing when looking to the team’s newly acquired players. Swedish defenceman Linus Nassen — acquired in the CHL import draft — just took his strides with the Florida Panthers, while goaltender Jordan Hollett is coming off his first development camp with the Ottawa Senators after being selected in the fifth round of this year’s draft at 183rd overall. Medicine Hat picked up Hollett in the trade that sent Bradley to the Regina Pats last month, and Tigers head coach and general manager Shaun Clouston says they’re excited to have another professional prospect on the roster.

“It’s a little bit of confirmation that what we believe we were acquiring the move (for Hollett) was a pro prospect goaltender,” said Clouston. “A player who can come in with some development and some games, and really solidify the net for us.”