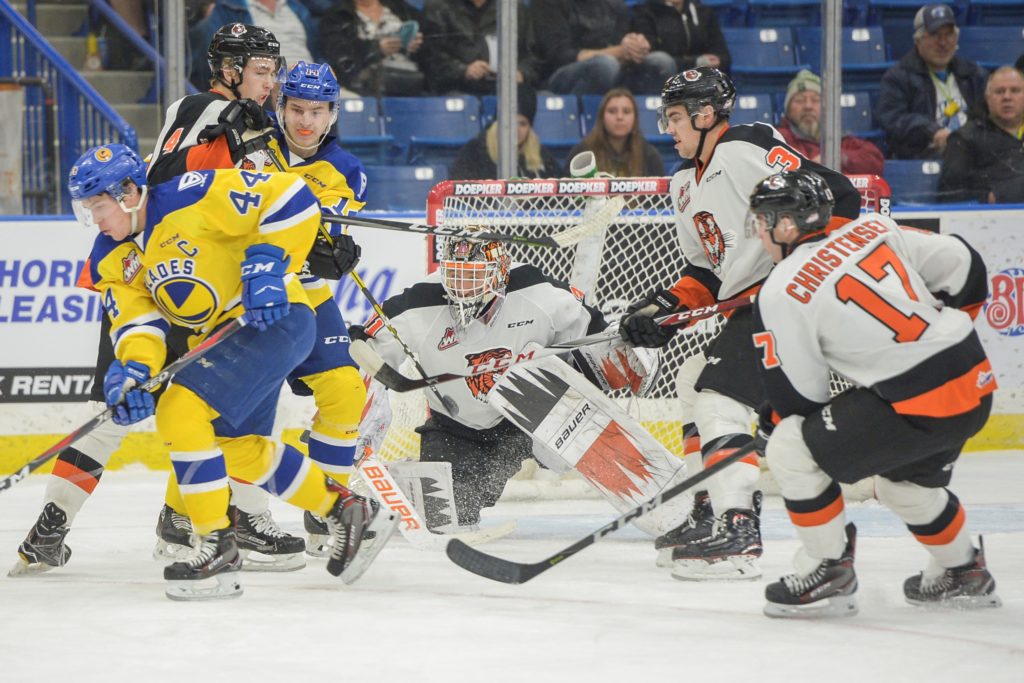 Medicine Hat, AB — The Medicine Hat Tigers made a late push in the game in an attempt to come back against the Saskatoon Blades but ultimately fell 4-2 after an empty net goal.

Veteran forward Ryan Chyzowski scored both of the Tigers’ goals in the losing contest while netminder Jordan Hollett turned aside 33 of 36 shots faced.

Chyzowski buried a rebound on the doorstep of Blades goaltender Nolan Maier during a power play midway through the first frame to open the scoring. Chyzowski’s 6th goal of the season was assisted by Ryan Jevne and Linus Nassen.

Late in the second stanza, the Blades scored back to back goals 1:42 apart to regain the lead. Veteran Max Gerlach scored the first before rookie Kyle Crnkovic added the second.

Early in the final frame, Chase Wouters scored to extend the Blades lead to 3-1.

The Tigers continued to push late in the period and after their 5 on 3 power play ended Chyzowski fired the puck in with 22 seconds left in regulation to make it a 1 goal hockey game. Bryan Lockner and Hayden Ostir combined on the play.

Hollett left the Tabbies’ net at 19:53 to give his team the man advantage. Unfortunately, the Blades gained possession of the puck and Kirby Dach scored on the empty net with 1 second left to play to seal the Blades 4-2 victory.

The Tigers are now 9-9-1-2 and will travel to Prince Albert to face the 17-1-0-0 Raiders Wednesday night. After tomorrow’s contest, the Orange and Black will continue on their road to play Friday night in Brandon and Saturday in Swift Current before returning home Friday, November 23rd to host the Raiders.