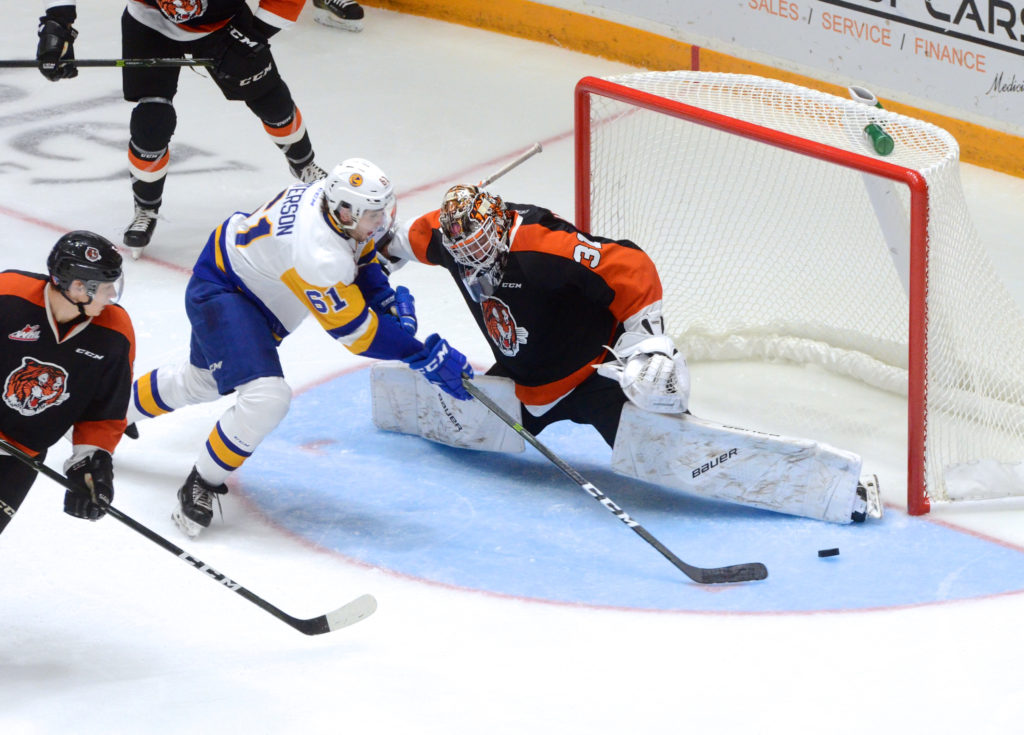 In times of adversity, every opportunity becomes a little more important, especially when it comes to the power play.

The Medicine Hat Tigers certainly made the most of their man advantages Friday night at the Canalta Centre, striking five times on seven chances to secure their second straight victory with a 5-2 win over the Saskatoon Blades.

While they only had 11 forwards dressed for Friday’s tilt — with Zach Fischer having left the team earlier this week and Max Gerlach and Jaeger White recovering from injuries — the Tigers stuck to their systems and broke through with a solid five-man effort to extend their record to 5-3-0-0 on the year.

David Quenneville opened the scoring for the second game in a row, converting on an early power play off a few crisp passes from Mark Rassell and James Hamblin.

But the struggling Blades refused to go down without a fight. Jackson Caller beat Tigers goaltender Jordan Hollett off the rush with five minutes left in the opening frame to send the teams to the break in a 1-1 tie despite Medicine Hat’s 13-5 lead in shots.

James Hamblin put the Tigers back out in front halfway through the second with his first of the year, making good on a man advantage with Saskatoon’s Lukus MacKenzie in the bin for high sticking. Quenneville and Linus Nassen picked up assists on the goal.

While Blades forward Josh Paterson responded with his own first of the year just over two minutes later, the Tabbies found another window of opportunity when Gage Ramsay was nabbed for hooking and the power play went back to work.

Rassell planted himself in front of the net and redirected a one-timer from Quenneville past Blades goaltender Ryan Kubic to re-establish a narrow lead through 40 minutes.

Saskatoon put themselves back into trouble just a few seconds into the third period and Tigers rookie Josh Williams stepped up with his second goal of the year and his team’s fourth power play goal of the night. The 16-year-old Langley product got just enough of a Quenneville point shot to fool Kubic and give Medicine Hat their first two-goal lead of the night.

But the Tigers didn’t stop there. Ramsay found himself back in the box after delivering a late hit on Quenneville and Kristians Rubins kept the good times rolling with his first goal of the year — sending the crowd at the Canalta Centre into a frenzy.

Quenneville has been on a tear since returning from NHL training camp with the New York Islanders. The 19-year-old Edmonton product has points in all seven of his games this season, including four in Friday’s win for a total of 14.

Hollett stopped 25 pucks to lock up his second win of the season, while Kubic turned aside 32 in the loss — dropping the Blades to 2-5-0-0.

The Tigers return to the Canalta Centre to host the Kootenay Ice on Friday at 7:30 p.m.