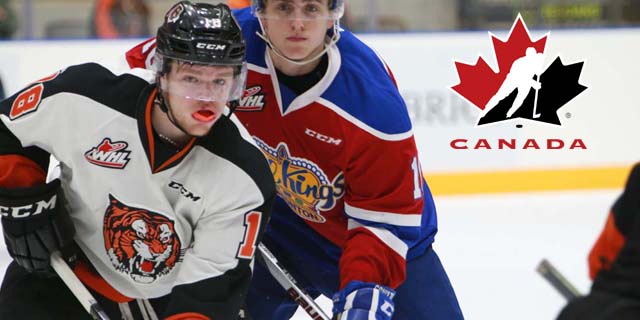 The game was the first of two for Canada ahead of the 2016 IIHF U18 World Championship; it faces Sweden on Tuesday night at the MTS Centre before heading south to Grand Forks, N.D., for the U18 worlds.

The Canadians took control early, netting five goals in a span of 13:04 in the first period.

Malenstyn got the scoring started quickly, beating Czech goaltender Josef Korenar only 3:20 in, before Comtois added his first goal on the power play at 9:49, and Quenneville made it 3-0 just 74 seconds later.

The power play struck again at 12:27, this time off the stick of Mason Shaw, and McLeod capped the offensive outburst at 16:24, sending the Canadians to the intermission with a commanding lead.

Matyas Kantner cut into the Canadian lead four minutes into the second period, getting a shot past netminder Evan Fitzpatrick (Lower Sackville, N.S./Sherbrooke, QMJHL), but Malenstyn and Comtois added their second goals in the final 3:25 of the middle frame.

Canada held an 8-5 advantage in shots on goal in a scoreless third period, and 32-24 overall.

Malenstyn finished with three points, McLeod and Shaw added a goal and a helper apiece, and Jakob Chychrun (Toronto, Ont./Sarnia, OHL) and William Bitten (Ottawa, Ont./Flint, OHL) chipped in with two assists each.