TIGERS PULL AWAY WITH A WIN IN SWIFT CURRENT 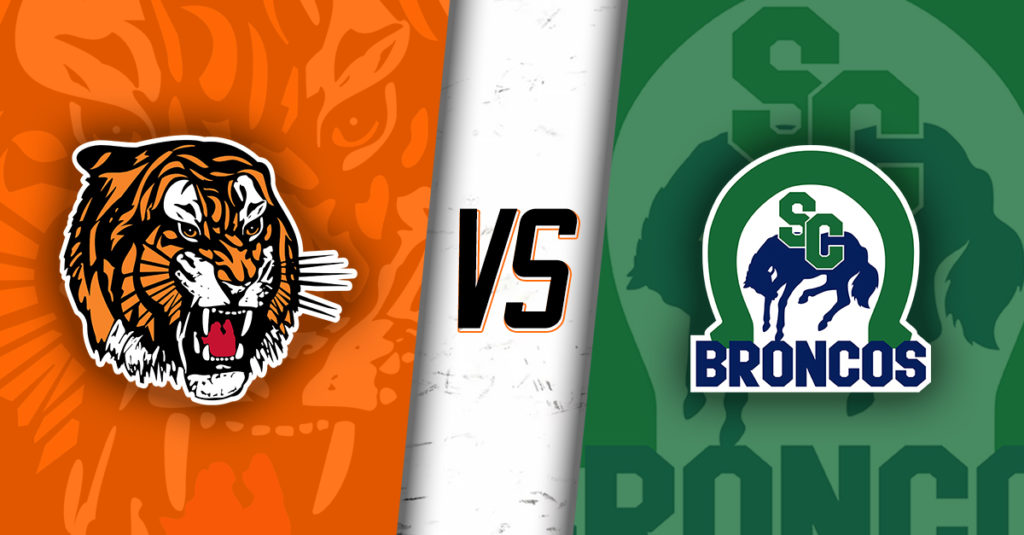 The Medicine Hat Tigers made their way to the iPlex in Swift Current for their penultimate game in the WHL preseason and came away with a convincing 6-3 victory over the 2018 WHL Champions.

The 1st period saw the Tigers open the scoring after the Broncos put pressure on the Tigers defence on their first shift but Medicine Hat responded with a strong forecheck from Oasiz Wiesblatt leading to a point shot from newly signed defenceman Blake Ekren-Bratton leading to a re-direct goal from Andrew Basha to make it 1-0 Tigers.

Medicine Hat would continue to reel after scoring on their opening shot by scoring on their very next offensive attack as Hunter St. Martin snuck a shot through goaltender Joey Rocha at 3:08. But the home side would finally get on the 1:19 later as Rayan Bettahar would make 2-1. The Broncos tied things up a little bit later as a shot from Rylan Gould just gets out of the clutches of James Venne and trickles past the goal-line to make it 2-2.

But just 2:11 Oasiz Wiesblatt would convert on a breakaway to make it 3-2 thanks a clean breakout from the Medicine Hat zone thanks to Basha and Rhett Parsons to give the Tigers a 3-2 lead heading to 1st Intermission.

Off to the 2nd and the Tigers would give themselves a two goal cushion once again as Oren Shrtom scored his 2nd of the pre-season to make it 4-2 with help from Dallon Melin & Ekren-Bratton at 3:01. But once again Swift Current would respond quickly as Caleb Wyrostok would score on a breakaway to keep the Broncos within a goal at 4:30. Goaltender James Venne would be replaced halfway through the frame for Ethan McCallum. The period would cool off in the goal scoring department until Cayden Lindstrom would beat Rocha far side with just 7.3 seconds left in the 2nd to give the Tigers a 5-3 lead into the intermission. Medicine Hat would outshoot Swift Current 17-7.

Off to the third period as both clubs would have their chances with special teams but the Tigers would take care of the Broncos on the road as Basha added his second goal of the night unassisted with just 1:43 left in the 3rd .

Medicine Hat would finish perfect on the penalty kill going 5/5 but were unable to make pay dirt on their extra-man advantages going 0/6.

The Tigers end up outshooting the Broncos 37-27 while McCallum would save all 10 shots he faced in the second half while Venne would make 13 saves on 17 Bronco shots.

The Pre-Season comes to a close tomorrow at Co-op Place as these two foes will face-off once again with a 7 PM puck-drop.