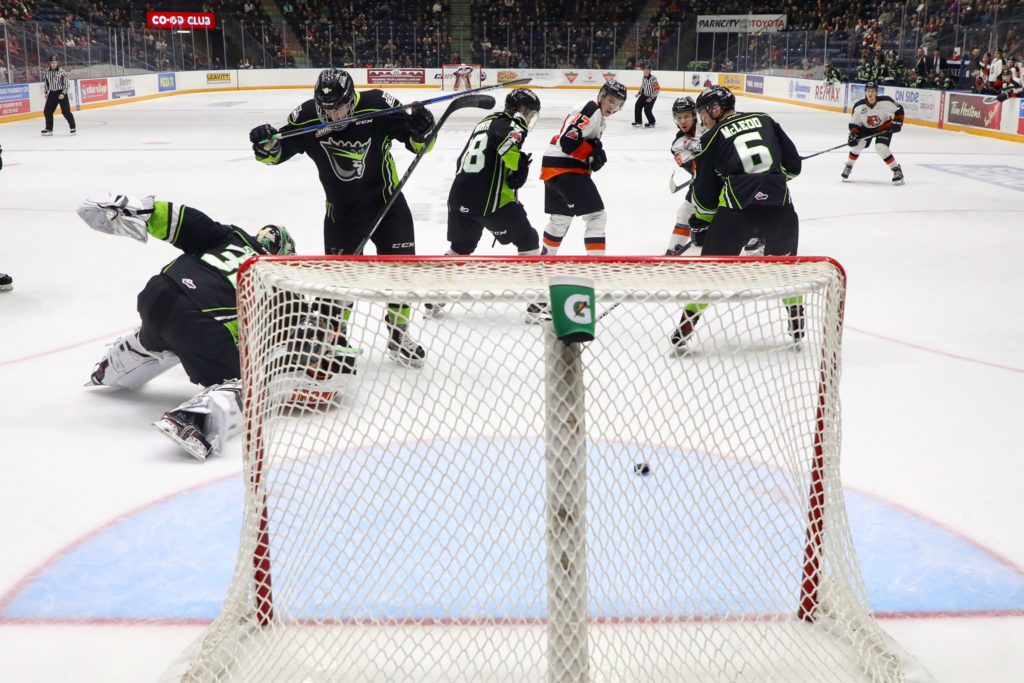 The Orange and Black returned to their winning ways tonight at the Canalta Centre defeating the Edmonton Oil Kings 6-4.

Captain Mark Rassell scored his 50th goal of the season to open the scoring early in the first period. Rassell beat Oil Kings netminder Todd Scott through the five hole on a play from David Quenneville and Michael Bullion.

Less than five minutes later, Oil Kings David Kope tied the game back up at 1 apiece.

Tigers capitalized on their first power play of the night when Ryan Chyzowski beat Scott from the side of the net to score his 20th goal of the season. Quenneville and Ryan Jevne picked up the assists on the play.

Elijah Brown deflected Quenneville’s shot from the point to send to the Tigers to dressing room leading 3-1 after 20 minutes of play. Linus Nassen as well as Quenneville picked up the assist on Brown’s 8th goal of the season.

Oil Kings made a comeback in the middle frame with Ethan Cap scoring midway through the period.

Jaeger White fired home the rebound on a wide open net to respond for the Tigers. Nassen and Brown assisted on the play to give the Tabbies a 4-2 lead.

Colton Kehler scored in the second period to cut the home team’s lead back to one before Conner McDonald tied the game up midway through the final frame.

Within minutes Brown and Hayden Ostir combined to set up Josh Williams to score the game winning goal the power play. Williams’ goal was his 10th of the season.

James Hamblin scored the insurance goal less than two minutes later on another power play to seal the Oil Kings’ fate. Quenneville picked up his fourth assist of the night and Chyzowski also assisted on the play.

Michael Bullion made a lot of amazing saves, turning aside 27 of the 31 shots. Oil King netminder Scott stopped 24 of the Tabbies’ 30 shots.