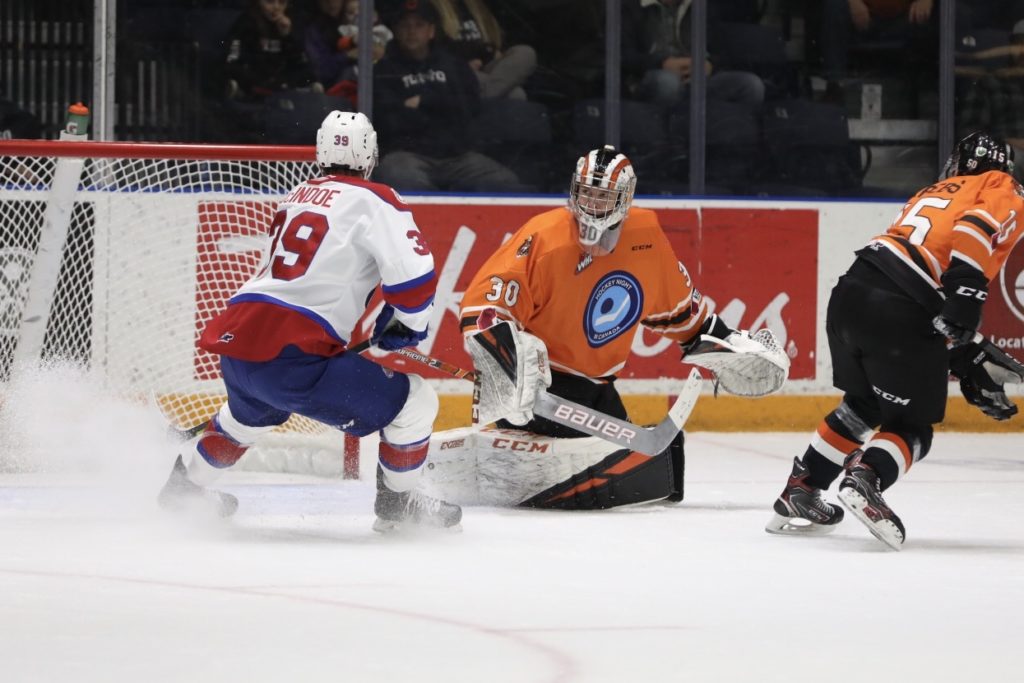 Medicine Hat, AB — The Medicine Hat Tigers came back from an early 1-0 deficit to defeat the Edmonton Oil Kings 4-1 during their WHL Suits Up to Promote Organ Donation Presented by RE/MAX game.

The Tigers wore themed jerseys as they collected their 40th win of the season. It is the 22nd time in their franchise history that they have won 40 or more games in a season. The jerseys from the game are being auctioned off online and the auction will close Wednesday, March 11th at 7:30 PM. All proceeds from the auction will go to the local chapter of the Kidney Foundation.

Oil Kings forward Josh Williams scored forty seconds into the game on a two on one to give the visitors the early lead. Despite play being back and forth the Orange and Black were not able to score until the second stanza when their offense exploded.

Early into that period, during the Tabbies’ third power play of the night, James Hamblin combined with Ryan Chyzowski to set up Brett Kemp for his 30th goal of the season bringing the game back to a 1-1 stalemate.

Midway through the frame, Lukas Svejkovsky played the puck out from behind the Oil Kings’ net to Ryan Chyzowski who fired it into the net. Daniel Baker also assisted on Chyzowski’s 32nd goal of the season that gave the Tigers the lead.

Late in the period, Hamblin set up Parker Gavlas to score his fifth goal of the season extending the Tigers’ lead to 3-1.

In the final frame, Kemp won possession of the puck and fired his shot on net which was turned aside by Oil Kings goaltender Sebastian Cossa. Corson Hopwo collected the rebound and fired it past Cossa to seal the 4-1 Tigers’ victory. Kemp’s assist on Hopwo’s 15th goal of the season is his 100th career WHL assists.

Medicine Hat is now 40-19-2-1 and they are in second place in the Central Division. Two points ahead of rivals the Lethbridge Hurricanes. The Tigers will be back in action Tuesday night at the Canalta Centre when they host the Red Deer Rebels.