TIGERS REBOUND WITH 7-2 WIN OVER BLADES 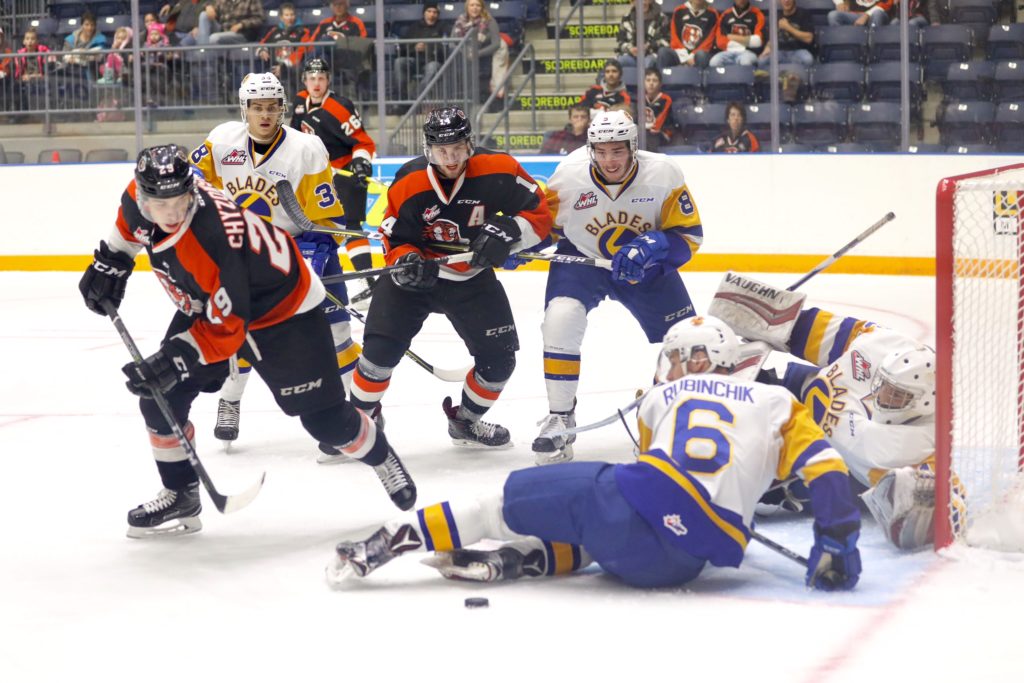 The Medicine Hat Tigers got the emotional victory they needed on Friday night at the Canalta Centre.

After being outscored 13-1 in a pair of lopsided losses last weekend, the Tigers rallied to a 7-2 win over the Saskatoon Blades to restore a narrow lead in the Western Hockey League’s Central Division.

The Blades were buzzing off the hop. While the Tigers earned the first quality scoring chance of the game when a Gary Haden pass skipped over the tape of Dawson Heathcote, Saskatoon surged back up the ice and Josh Paterson beat Hat goaltender Jordan Hollett to gives the Blades an early edge.

But Haden found another window a few minutes later, and this time he made good on the chance — tipping a Dalton Gally point shot past Saskatoon’s Ryan Kubic to draw even.

Haden wears No. 17 to honor his former UFA Bisons teammate Markus Lavallee — who died in a car accident in the summer of 2015. He also recently got a custom pair of skates with Lavallee’s initials stitched into the tongue. Friday was the first night he wore them in a game.

Tyler Preziuso pushed the Tigers in front in the final minute of the opening frame with his team’s second successful deflection of the period. The 18-year-old right winger tipped a Ryan Jevne shot into the top of the net to send Medicine Hat into the break with their first lead of the night.

The offence continued to flow into the second. David Quenneville doubled up on the lead midway through the second by snapping a one-timer past Kubic on the power play for his sixth of the season.

Quenneville — who will represent Medicine Hat and the WHL at the CIBC Canada-Russia Series — struck again a few minutes later, then Ryan Chyzowski drove in another for good measure to leave the Blades reeling after 40 minutes.

James Hamblin added to the onslaught with Medicine Hat’s sixth unanswered goal just over a minute into the third, finishing off a power play chance started by defenceman Linus Nassen for his fourth goal of the year.

Redcliff product Dylan MacPherson rounded out Medicine Hat’s scoring with his second goal in seven nights — and the second of his career — later in the frame to bring the 3,029 fans who braved the snow to their feet.

Blades centre Cameron Hebig finally put a stop to the bleeding midway through the third, beating Hollett on the power play with Hamblin in the box for tripping, but it was all Saskatoon would muster on the night.

Hollett locked up the 20-save victory to snap a two-game slide and push Medicine Hat to 9-6-0-0 on the year. Kubic took the loss — dropping Saskatoon to 6-8-1-0 —after allowing five goals on 28 shots through 40 minutes. Joel Gryzbowski entered to start the third and made 10 stops in relief.

The Tigers return to the Canalta Centre Saturday to host the reigning WHL champion Seattle Thunderbirds (9-5-0-1) at 7:30 p.m.