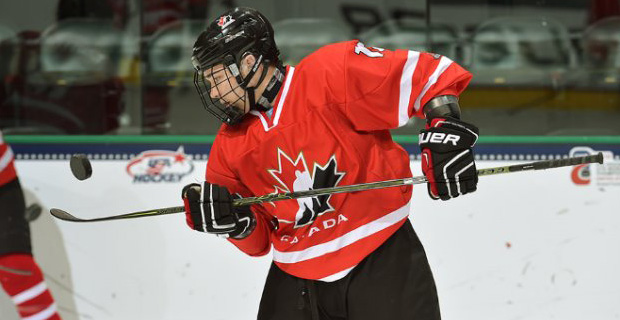 And after a 4-0 start behind the bench of Team Canada at the IIHF Under-18 World Championship in Grand Forks, N.D., he’s on pace for a shot at another golden moment.

“This is right up there,” said Clouston of the tournament so far.”Clouston is joined by a posse of Tabbies, with defenceman David Quenneville and forward Mason Shaw suiting up as key contributors to Canada’s success, and athletic training Mikki Lanuk joining the ranks on the bench.

“Whether you’re a coach, or support staff like Mikki, or a player or Mason and Dave and the rest of the team, this is a real special opportunity,” said Clouston. “It’s always an honour and a privilege to get to do this kind of thing.”

Quenneville — who won gold under Clouston with Canada at the Ivan Hlinka Memorial Classic — has been on a tear at the tournament. The 18-year-old offensive blueliner leads the team’s WHL talent with two assists and two goals, including Tuesday’s game-winner in a 3-1 victory over Finland.

“It’s a great opportunity and we’re all having fun with it,” said Quenneville. “It’s been great to contribute and be an important part of the team.”

Shaw sits just behind Quenneville with two goals and an assist through his first three contests in red and white, and says capitalizing on the opportunity to compete on the world stage has been an unforgettable experience.

“It’s been awesome, and to do this with Dave is even more special. We’ve got a really tight bond and that really helps a lot, we’re even roommates together,” said Shaw. “We’ve been having success so far, so hopefully we can keep that going here.”

Given the Tigers went without playoff hockey for the first time in 14 years, Clouston says the tournament is a great opportunity for Quenneville and Shaw to get in some valuable ice time against some of the world’s top young talent.

“Both of them have done a great job,” said Clouston. “They compete real hard, they can play the game the right way and they’ve both contributed.”

Team Canada sits atop Group B with a 3-0 record at the end of round robin play, and is slated to take on Switzerland in this afternoon’s quarter-final match at 2:45 p.m. While Canada hasn’t clinched gold at the event since 2013, Shaw says they’re primed and ready to re-take the title of world’s best.

“Winning gold would mean everything for us,” said Shaw, adding it’s going to take every ounce of heart and strength in the tank. “At the end of the day if you’re not working hard or doing the little things right you’re not going to succeed. We’ve all got to buy into the little things so we can succeed.”