TIGERS ROAR AGAIN IN THE WHL 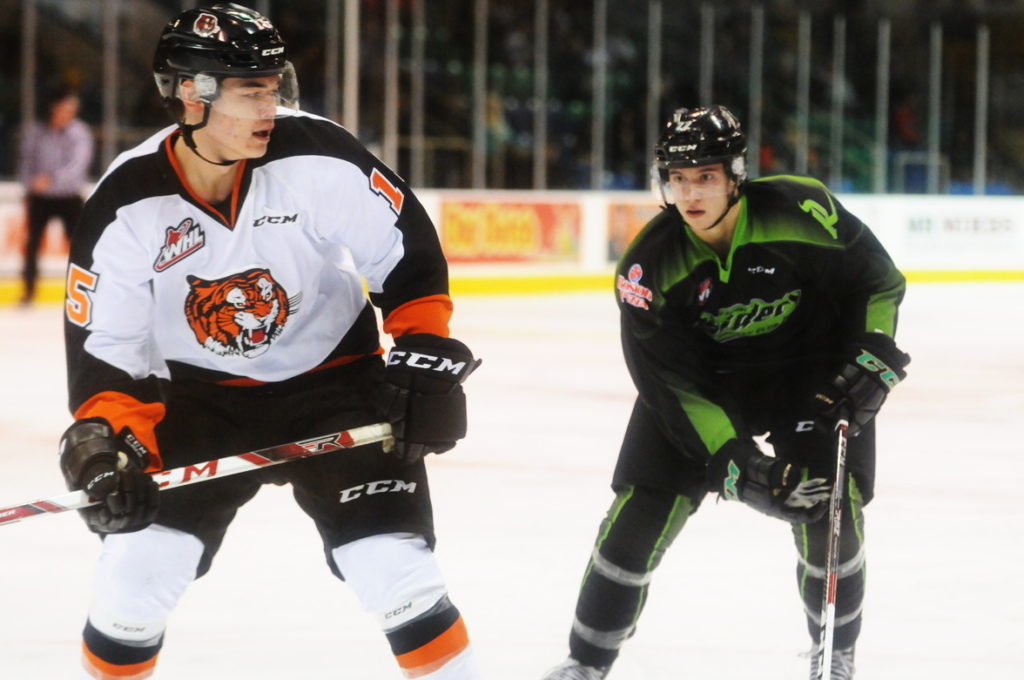 It didn’t take the Medicine Hat Tigers long to start looking like themselves again, which means they alone are worth the price of admission on any of their Western Hockey League game nights.

Last year, the Tigers saw their run of making the WHL playoffs for 13 consecutive years come to an end. Posting a 30-37-3-2 record in the regular season, the Tigers faced the Edmonton Oil Kings in a standings tiebreaking game for the final playoff berth in the WHL’s Eastern Conference and came away on the wrong end of a 6-4 final.

After just over a third into the current campaign, the Tigers are back to their high speed and high skill form.

On Saturday night at the SaskTel Centre, the orange and black systematically dismantled the host Saskatoon Blades 8-2 before 3,802 stunned spectators. The win was Medicine Hat’s ninth straight victory and has vaulted the Tigers to the top of the overall WHL standings with a 20-5-1 mark.

The Everett Silvertips (18-3-4) trail the Tigers by a point for first overall with a game in hand.

Veteran Tigers head coach and general manager Shaun Clouston has no complaints about where his team is at.

“It has been great,” said Clouston. “I think our older guys, our leaders are doing a terrific job of making sure the room is ready every night.

“We’ve got lots of guys contributing. We’ve had some guys really step up and have breakout years. (Mark) Rassell and (Zach) Fischer are good players and they just really had breakout seasons.

“James Hamblin who was 16-years-old last year, he has taken big strides. We are getting contributions from our imports. I think those two additions with (Kristians) Rubins and (John) Dalhstrom really helped us.”

The only big down parts the Tigers faced against Saskatoon came from the fact Blades left-winger Braylon Shmyr opened the game’s scoring at the 1:56 mark of the first period, and he added a second marker with 53.8 seconds to play in the opening frame to ensure both sides entered the first intermission locked in a 2-2 tie.

The rest of the contest belonged to the Tigers. They transitioned up ice at a lightning pace stringing together various quick passes and were on top of Blades goaltenders Logan Flodell and then Brock Hamm with prime scoring chances. Medicine Hat also kept Saskatoon pinned in its own zone with a fairly aggressive forecheck.

Fischer and offensive defenceman David Quenneville netted the Tigers first period tallies. The visitors blew the roof off the building in the second frame. Overage centre Chad Butcher scored 17 seconds into the middle stanza and right-winger Max Gerlach netted a hat trick, which included two tallies on impressive snipes, to put the Tigers up 6-2.

Flodell was chased after the Tigers fourth goal at the 2:27 mark of the second turning away 17-of-21 shots sent his way. Hamm stopped 18-of-22 shots sent his direction as the Blade dropped to 10-16-1.

In the third, Butcher collected his second goal of the night and Dalhstrom added a single to round out the blowout score. Netminder Nick Schneider turned away 22 shots to pick up the win in Medicine Hat’s goal.

The Tigers effort was businesslike. After each goal, the players took part in a small celebration and calmly skated into position for the next faceoff.   “It was pretty close there for a bit,” said Quenneville, who had an assist to go along with his goal. “We just played our game, and the floodgates blew open.