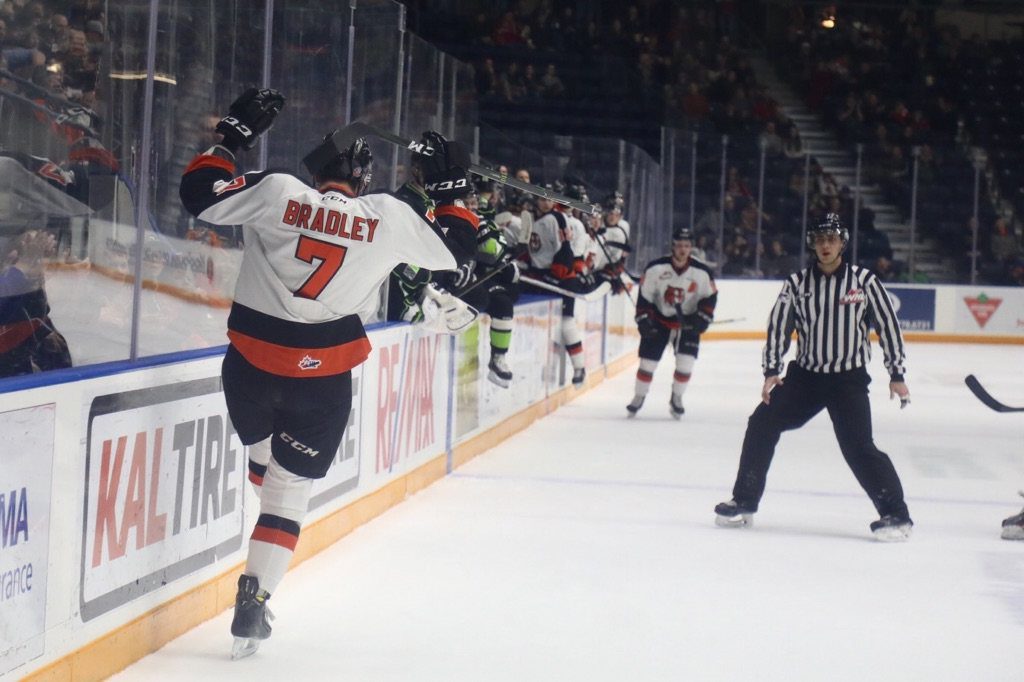 Medicine Hat, AB — The Medicine Hat Tigers welcomed the slumping Edmonton Oil Kings to the Canalta Centre fresh off a 8-1 whipping of the Kootenay Ice on Tuesday night. Edmonton had dropped their last 8 games heading into the night, coincidentally that span is the same amount of games since they traded Captain Aaron Irving to Everett and Lane Bauer to Kamloops. Medicine Hat looked to continue the momentum and they did in another big way.

With the dominating mindset the Tigers dropped the ball early on and allowed the visitors to jump to an early lead thanks to the power play. Edmonton rolled out their man advantage unit and 16 year old rookie Nicholas Bowman buried his 6th of the season under the cross bar as the Oil Kings took a 1-0 lead just 1:39 into the game. The veteran Tigers were not phased however as the remainder of the period was controlled by Medicine Hat. The 4th line for the Tigers in Gary Haden, Tyler Preziuso and Ryan Jevne had a wail of a game. The trio was rewarded for their work in Cranbrook with an anthem start and were forces to be reckoned with all night.

Mason Shaw would get the Tigers on the board first on a power play of their own. Just 7 seconds was needed of the man advantage as Matt Bradley fed Shaw with a nice cross seam pass that Shaw would one timer home for his 17th of the year. Medicine Hat would get the lead from an unlikely source, big Texan d-man Dalton Gally netted his 1st ever WHL goal with a slick wrister that found its way past Edmonton starter Josh Dechaine. Before the period would end Medicine Hat saw their 7th player reach 20 goals on the year, a feat that hasn’t been done in over a decade, when Matt Bradley buried his 20th of the season for a 3-1 lead after 20 minutes.

The Haden line continued to be a thorn in Edmonton’s side on this night. The trio was rewarded when Haden took a saucer pass from Preziuso and was in on a short break. Haden roofed the puck quicker than Dechaine could react and netted his 4th of the year extending the lead to 4-1. Edmonton cut into the lead with Adam Berg’s 5th of the year but all was restored as Medicine Hat scored back to back goals to finish out the period. Clayton Kirichenko sent the fans into a frenzy as he scored his 7th of the year, highlight reel style. The Captain made a nice toe drag around a Oil Kings forward before going top shelf on Dechaine, be sure to see that goal on the top 10 plays of the week. Jordan Henderson would bury his 2nd in as many games 18 seconds after the Kirichenko goal. Just like that the Tigers had themselves a 6-2 lead through 40 minutes.

In the third it was a push back from the Oil Kings. If the Tigers wanted to win they knew they had to weather the storm Edmonton was bringing as they seemed to come to life in the final period. Nick Schneider was solid in goal for Medicine Hat, stopping all 12 shots his way in the period. The biggest save for Schneider was a sprawling goal line glove stop on Graham Millar at the side of the net. Edmonton wouldn’t get close as Medicine Hat closed the game with a last second goal, 1 second to be exact with a pretty passing play from Chad Butcher and Zach Fischer as that made it 7-2.

Medicine Hat is right back to work Saturday night as they host the Brandon Wheat Kings for the final time this season. The Tigers will then host the Kootenay Ice next Tuesday before heading out on the road to face the Ice and then to the USA for dates against Spokane and Tri-City.