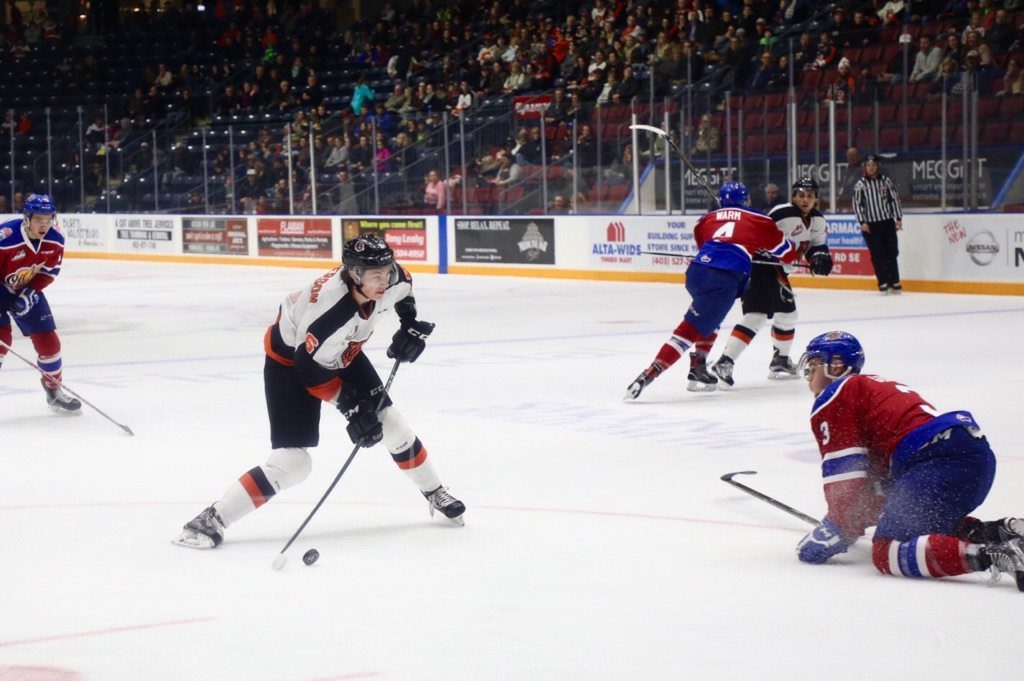 Matt Bradley and Zach Fischer both netted hat tricks in a 9-3 landslide over the Edmonton Oil Kings — staking their lead on the Central Division to four points with just four games left on the docket.

Fischer kicked off the scoring by finishing off a strong forecheck with his 31st of the year. While the Oil Kings mustered a response just over a minute later — with Colton Kehler chipping a puck past Tigers goaltender Nick Schneider to draw even — Bradley and Shaw had no intention of leaving empty handed and opened the floodgates on Edmonton’s Josh Dechaine.

The duo combined for six points on the night, with Bradley netting his first career hat trick on a trio of Shaw set-ups. They immediately went to work after Kehler’s marker, with Shaw stealing away a puck on the forecheck before feeding Bradley to re-establish a lead.

They repeated the feat three minutes later when Shaw found Bradley in the slot with a no-look backhand pass, and the Tabbies were off to the races.

While Bradley’s hatty wasn’t a natural — as Fischer kicked off the second period by netting a second goal of his own — it was certainly flashy. Shaw once again found Bradley in a prime scoring position and the 19-year-old Montreal Canadiens draft pick beat Dechaine clean, sending the caps flying onto the ice.

The Tigers didn’t stop there. Defenceman David Quenneville ripped his second goal since returning from a broken leg into the back of the net a few minutes later, then Tyler Preziuso cut through the defence for a fancy breakaway goal to end Dechaine’s night early after seven goals on 30 shots.

But the goaltending swap did nothing to stunt Medicine Hat’s roaring momentum. Butcher joined the parade with his 26th of the year in the dying moments of the middle frame to leave the Oil Kings trailing by a touchdown, then Fischer completed his own hat trick just over a minute into the final frame to establish a staggering eight-goal lead.

The Oil Kings managed some consolation in the third when defenceman Brayden Gordon and forward Davis Koch connected for back-to-back goals on Schneider, but it was nothing more than a dent in Medicine Hat’s massive lead.

While it was a fairly quiet night between the pipes for Schneider, the 19-year-old Calgary Flames product was still tasked with some big saves — including bailing out his defence by robbing Kehler on a breakaway after a turnover in the Tiger zone. By the end of the night, Schneider had 18 saves to his credit for his fifth straight victory and 32nd on the season despite not playing since Feb. 24.

Dea finished the contest with 19 saves in relief of Dechaine.

The victory proved pivotal as the Lethbridge Hurricanes — who are hot on Medicine Hat’s heels for the top of the Central Division — dropped a 4-3 contest to the Calgary Hitmen in regulation.

Sitting at 48-19-1-0, the Tigers only need two more wins to effectively clinch their first Central Division banner in 10 years. While the Hurricanes (43-18-4-3) would still be able to tie in terms of points, the Tigers have already collected more wins than Lethbridge can achieve this season.

These two teams are back in action Saturday night at Rogers Place for a 7pm puck drop.