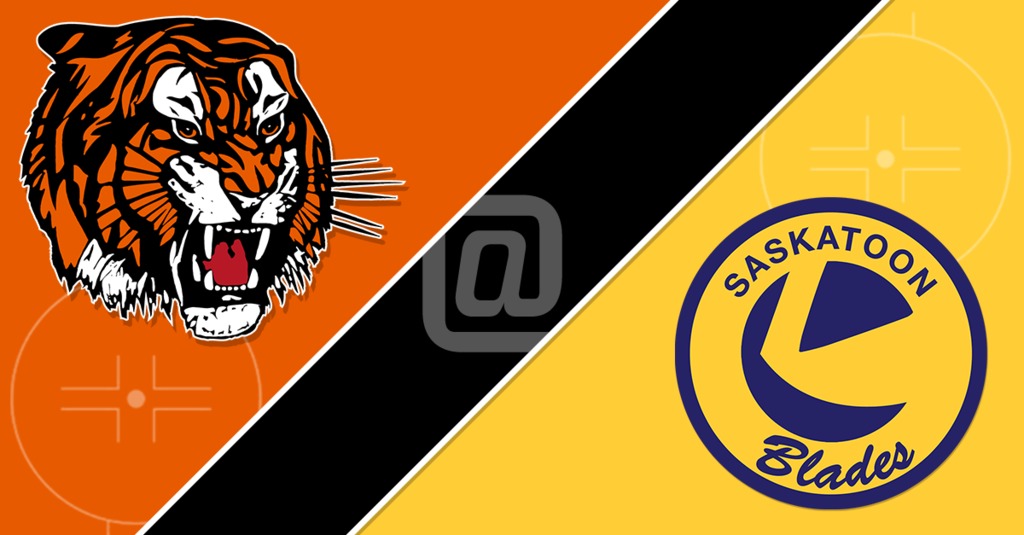 Medicine Hat, AB — The Medicine Hat Tigers make a stop in Saskatoon for their third game of the season and the first on this road trip. The Saskatoon Blades are only playing game two tonight after dropping their first game to the Swift Current Broncos. Medicine Hat would get Zach Fischer back in the lineup as well as newcomer Jaeger White who is making his Tigers debut. Michael Bullion would make his 3rd consecutive start this season after playing both games versus Lethbridge. Ryan Kubic would get his 2nd start for the home side.

Medicine Hat would open the scoring just 3:27 into the 1st on a nice passing play. Jaeger White would thread the needle through two Blades defenders and find Max Gerlach at the back door for a 1-0 lead. The Tigers forecheck would cause the Blades to turn the puck over, Max Gerlach would find the loose puck and beat Ryan Kubic for his 3rd of the year and 2nd of the period. Cole Clayton would get called for interference at 13:08 sending the Blades on a power play. Medicine Hat would keep the Blades from entering the zone, killing off the penalty keeping a two-goal cushion. Josh Paterson would clip Zach Fischer in the face sending the Tigers to their first power play. Ryan Kubic would turn away all 4 chances on the power play. Saskatoon would get a 2 on 1 at the end of the period, Michael Bullion would reach out and make the glove save, he would turn away all 9 shots he faced in the 1st period.

The Tigers high-powered offence would open up the floodgates in the second period. Evan Fiala would cross-check Zach Fischer into the Blades net sending the Tabbies on a power play. While on the power play David Quenneville would find Mark Rassell all alone in front of the net, as he would make no mistake for the 3-0 lead.  Cole Clayton would score his first WHL goal adding to the Tigers lead with a wrist shot through traffic, that got deflected off Arjun Atwal past the Saskatoon netminder to make it 4-0. Tempers would start to boil over for the Blades as Chase Wouters would high stick Zach Fischer sending Medicine Hat back to the power play. Ryan Jevne would make the Blades pay, with a blast from the blue line as it blew by Kubic for a 5-0 lead. That would be the end of the night for Ryan Kubic as he would leave the game with 10:10 reaming in the 2nd period, after stopping 11/16. 18-year-old Joel Grzybowski would come in relief making his WHL debut. Max Gerlach would spring Mark Rassell on a breakaway, as he would go backhand-forehand to beat Grzybowski for the Tigers 6th goal of the game with just 13 seconds remaining in the 2nd period. Michael Bullion would turn away all 8 shots he faced in the period continuing his 5th period of shutout hockey.

In the 3rd the Chase Wouter’s would end Michael Bullion’s shutout streak, as he would fire one over the shoulder to put the hometown team on the board. The Blades would add another one just 49 seconds later. The youngster Kirby Dach with a nice little toe drag to find Gage Rasmsay to make it 6-2. That’s as close as the Blades would get as the Orange and Black’s defense and Michael Bullion would shut down the Blades the rest of the period as the Tigers leave Saskatoon with a 6-2 victory. Michael Bullion would finish the game stopping 21/23 for his 2nd win of the season.

The Medicine Hat Tigers will now travel North tomorrow to take on the Prince Albert Raiders at 7pm. The Raiders will be hosting their WHL Suits up with Don Cherry to Promote Organ Donation – Presented by RE/MAX night tomorrow night.