TIGERS SCORE FIVE GOALS IN THE SECOND TO SINK COUGARS 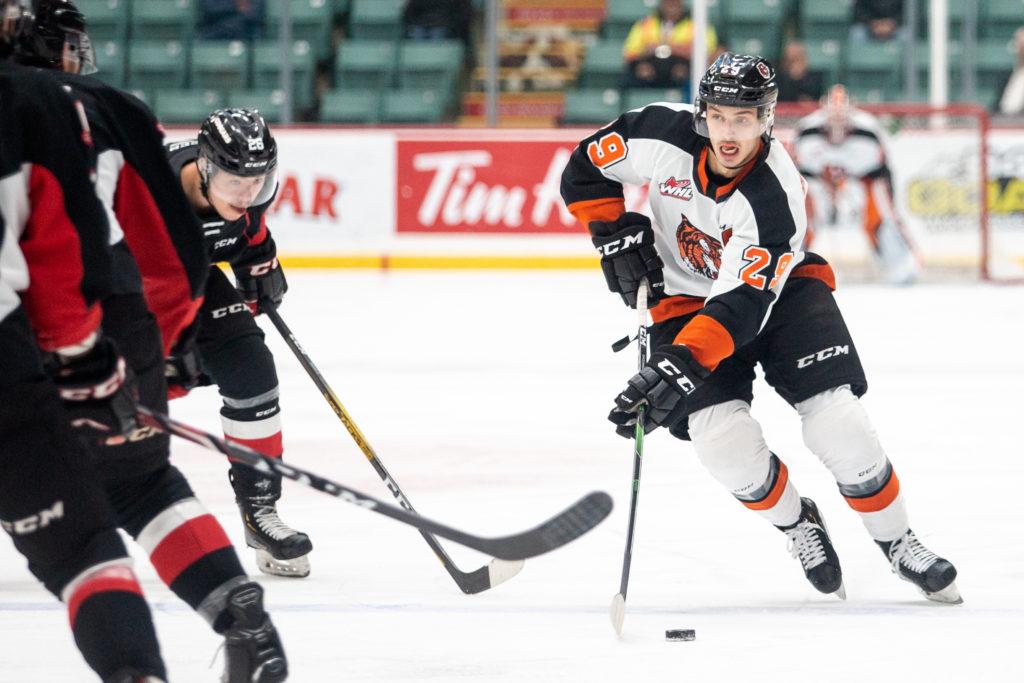 Trailing 2-0 early into the second stanza, the tenacious Tigers rallied and scored five goals in less than nine minutes. Captain James Hamblin had a two goal night in the victory while veteran defenceman Trevor Longo played in his 100th career WHL game.

Prince George’s forward Mitchell Kohner scored just under two minutes into the game to take an early lead for the home team. Quickly into the second stanza, Cole Moberg extended the Cougars’ lead to 2-0 before the Tigers mounted their comeback.

Tyler Preziuso scored his fifth goal of the season on the power play to get the Tabbies on the scoresheet and create the momentum for the Orange and Black. Preziuso’s goal was assisted by Bryan Lockner and Nick McCarry.

Just over a minute later, Hamblin redirected Dru Krebs’ point shot to score first of the night and bring the game to a stalemate.

Midway through the period, Parker Gavlas sent Brett Kemp a cross ice pass and Kemp fired the puck from the bottom left circle past the blocker of Cougars’ goaltender Taylor Gauthier. McCarry also assisted on Kemp’s fourth goal of the season.

While on the power play, Ryan Chyzowski won the faceoff and Hamblin fired the puck through the legs of Gauthier for his second goal of the night and 11th of the season.

Shortly after Hamblin’s second marker, Caleb Willms skated down the wing and passed the puck across to Baxter Anderson who did not hesitate to bury the puck into the back of the net and score his first of the season.

In the final frame, the Cougars rallied and scored pair of power play goals to make it 5-4. Moberg scored his second of the night early in the period before Jack Sanders brought the home team within one.

Rookie goaltender Garin Bjorklund stopped 24 of 28 shots faced and Gauthier turned aside 24 of the Tigers’ 29 shots.

The Orange and Black are 11-5-1-0 and they will finish their BC Road Trip by playing the Kelowna Rockets on Friday and the Kamloops Blazers Saturday.