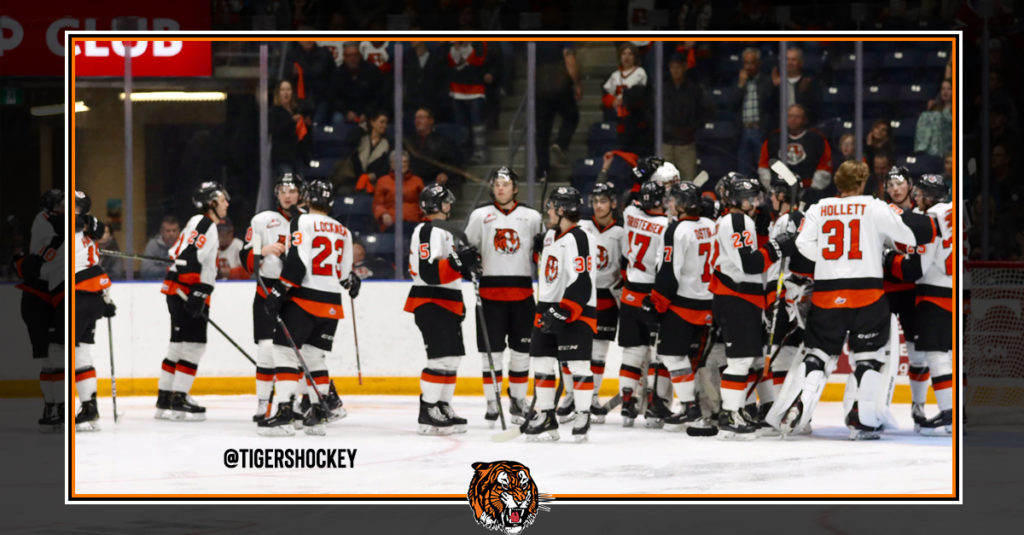 The Oil Kings will now advance to the Eastern Conference Semi-Finals and play either the Lethbridge Hurricanes or the Calgary Hitmen.

Oil Kings’ forward Trey Fix-Wolansky opened the scoring early in the game while the Tigers were on the power play.

Shortly after Fix-Wolansky’s goal, Corson Hopwo redirected Trevor Longo’s shot from the point to tie the game back up 1-1. Hopwo’s first goal of the playoffs was also assisted by Dylan MacPherson.

In the second stanza, James Hamblin scored a pair of goals to give the Tabbies a 3-1 lead. For his first goal of the night, Hamblin redirected Ryan Jevne’s shot past Oil Kings’ goaltender Todd Scott. Tyler Preziuso also assisted on the play.

While the Tigers were on the power play, James Hamblin buried a rebound to score his second of the night and fifth of the playoff series. Hamblin’s goal was assisted by Jevne and Ryan Chyzowski.

Oil Kings defenceman Wyatt McLeod responded for the Oil Kings and the Tabbies headed to the dressing room leading 3-2 after 40 minutes play.

In the final frame, Connor McDonald scored for the Oil Kings to tie the game up and send it to extra time.

Early into overtime on a 2 on 1 rush, Fix-Wolansky passed the puck to Vince Loschiavo who scored the game-winning goal.

The Orange and Black would like to thank all their fans and sponsors for their support this season and we are looking forward to the 2019-20 season.