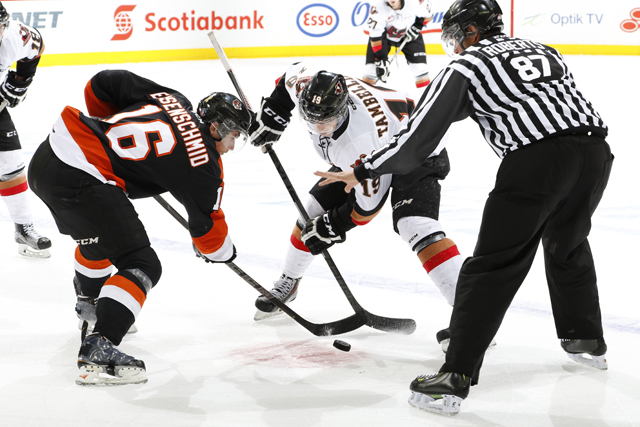 Medicine Hat, AB — In a must win game the Medicine Hat Tigers knew they needed a good start from everyone in the lineup. Game 5 proved to be a thriller heading to the second straight overtime game in this series. Marek Langhamer was great in net for the Tigers, backstopping the Tabbies to over 90 minutes of hockey. But unfortunately the season ended in the fifth period with the Hitmen winning 4-3.

The opening period had a good start for the Tigers as Cole Sanford led the way with his 5th of the playoffs just over 3 minutes into the game. Sanford found a loose puck at the side of the net and batted home the rebound to take the early lead for the Tigers. The two teams would trade goals all night as not one team took a two goal lead in Game 5. The Hitmen came back with 5 minutes left in the period as Jake Virtanen, who had seemed to find his scoring touch in this series, made a nifty move around a Tigers defender and caught Langhamer cheating on the pass to find the far side wide open with a wrister to tie the game before the period was over. It was a good period for both clubs as they generated lots of offense early on, seeing 14 shots combined in the first 4 minutes of the game.

The middle frame was once again evened out by the teams, not giving an inch defensively but if there was a break down in coverage, both goaltenders stood strong. The Tigers would get another early goal from Dryden Hunt who has been exceptional in this postseason for the Tigers, netting his 5th of the playoffs after showcasing his baseball skills, literally batting home a rebound in front of the Hitmen net for a 2-1 lead. The Hitmen would come back however just before the 2 minute mark of the period, as rookie Jake Bean who found his way back into the lineup after missing majority of the playoffs with injury, wristed a shot from the blue line which found its way into the back of the net for a 2-2 tie after 40 minutes.

It was fitting that the deciding goal was going to happen in the final 20 minutes for these clubs. Both teams have played well and showed the WHL how tough the Central Division really is on any given night. Both teams were tense and not creating lots of offense early on in the period however, it opened up quite a bit past the midway point as the Tigers would fire 16 shots on goal in the frame. Markus Eisenschmid would show off his blazing speed, beating a Hitmen defender and making a gorgeous move in front of Mack Shields to give the Tigers a lead with only 8 minutes left in the game. Eisenschmid however would take a penalty with 50 seconds left in the period, hoping that the Tigers could put a wall up behind them on the penalty kill and send the series back to the Hat.

However, fate was with the Hitmen on this night as Calgary won the ensuing faceoff on the power play setting up their man advantage witht he goalie pulled making it 6 on 4. The Tigers did a great job for the first 10 seconds of the power play, getting into lanes, and not allowing the Hitmen to shoot. But, the game is a fast paced game and with one shot on net, Virtanen was “johnny on the spot” at the side of the net for a rebound and potted home his 2nd of the game to tie it late, sending the Saddledome into a frenzy. That meant we had overtime for the second straight game.

It was a great overtime period by both teams as they showed desperation trying to end the game. Calgary was all over the Tigers in the back half of overtime, firing 16 shots on Langhamer to just 6 for the Tigers. Calgary seemed to have all the momentum heading into the final minutes of the extra period. However, both goalies were strong and held the fort for their respective teams, sending this one to another overtime period.

The fifth frame was once again a battle as fans could start to see fatigue set in on both sides, quick shifts and sluggish forechecks happened for both sides but still was very entertaining. Heading around the 5 minute mark of the second overtime, looking at the shot clock was 53-53 in shots, a remarkable amount for the clubs in this game, showing the determination of both goaltenders.

A Tigers icing forced a faceoff on the right side of Langhamer, the draw was won cleanly by the Hitmen to the side wall as the Tigers tied up their men off the draw avoiding any potential passes. Travis Sanheim, who has been a leader for the Hitmen on the back end, leading all WHL defenseman in scoring during the postseason picked up the puck off the wall and threw it on net. Langhamer seemed to have been screened briefly and the puck found the shortside and in the back of the net, winning the game for the Hitmen.

It was an amazing season for the Medicine Hat Tigers as they rolled through the season like a roller coaster encountering many ups and downs along the way. They showed that even the smallest players can have success in the league. They showed incredible determination thorughout the playoffs, not taking a shift off and always coming ready to play.

The Tigers would like to thank all of the fans who read these recaps, the fans who travelled to watch the orange and black play and to all the fans who listened back home from their houses.

We enter next year with a new era and new brand of Tigers hockey, still reminding us of all the history sitting on Ash Avenue.

THANK YOU TIGERS FANS FOR A GREAT SEASON!

The Tigers will head home and take the weekend off before packing up the dressing room as the players start to dismantle back home or to the AHL for the summer. 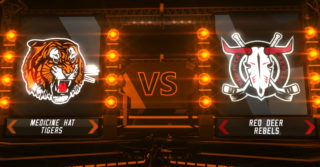 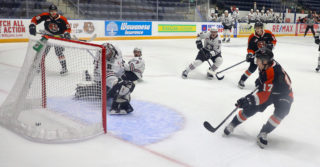 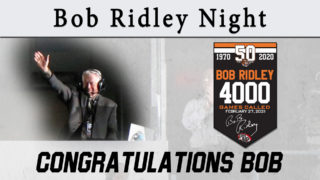 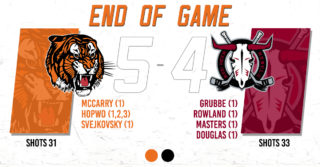 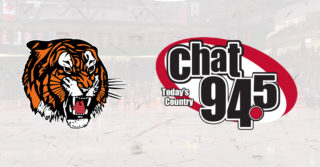