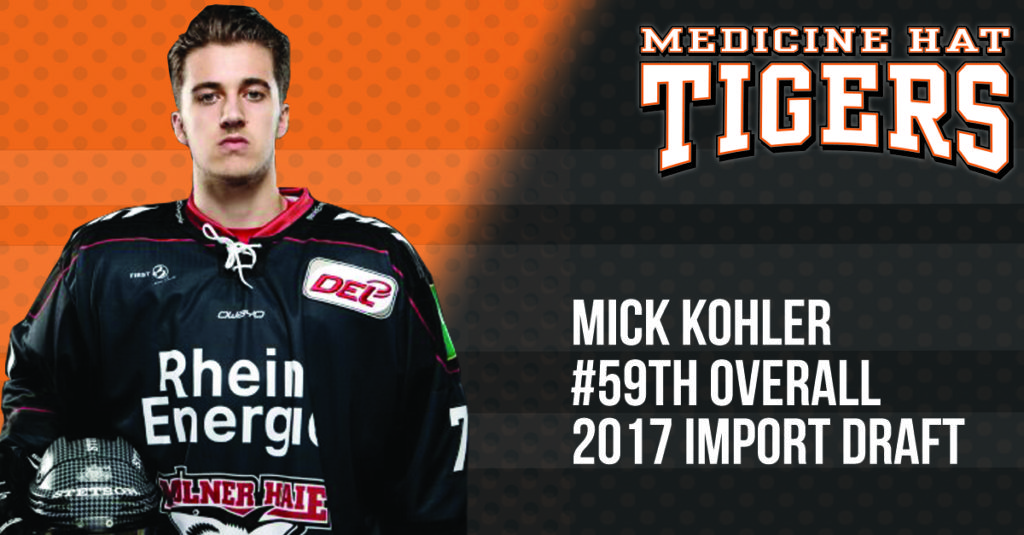 Medicine Hat, AB — The Medicine Hat Tigers scored last season with import players Kristians Rubins and John Dahlstrom as both were impact players and helped the Tigers to their 4th best season in franchise history. The Tigers selected twice in the annual CHL Import Draft last year and were looking to pick the next European flare to their roster Wednesday morning.

The Tigers held the 59th overall selection in the opening round and by virtue of 6 other teams not selecting in the draft this year Medicine Hat’s pick became the 53rd pick in draft. Teams can ‘pass’ their picks, similar to the Bantam Draft, if they already have European players on their roster for 2017-18.

The Tigers are pleased to select Mick Kohler with the 53rd overall selection in the CHL Import Draft.

Kohler is from Bonn, Germany and stands in at 6’3 and 200lbs. Last season Kohler split time with Kolner EC U19 (a junior team in Germany) and Dresdner Eislowen (DEL Division 2 professional hockey). With his junior team Kohler put up impressive numbers recording 65 points in 35 games. With Dresdner Kohler recorded 4 points in 20 games and appeared in 2 playoff games.

In his career Kohler represented Germany in 2015-16 at the World U18 Championships – Division 1A recording 1 assist in 5 games. Kohler has been to Canada playing with Team Germany at the Mac’s Midget Hockey Tournament in Calgary during 2014-15 playing in 5 games.

The Tigers would like to welcome Mick to the organization and look forward to seeing him in a jersey come the fall.