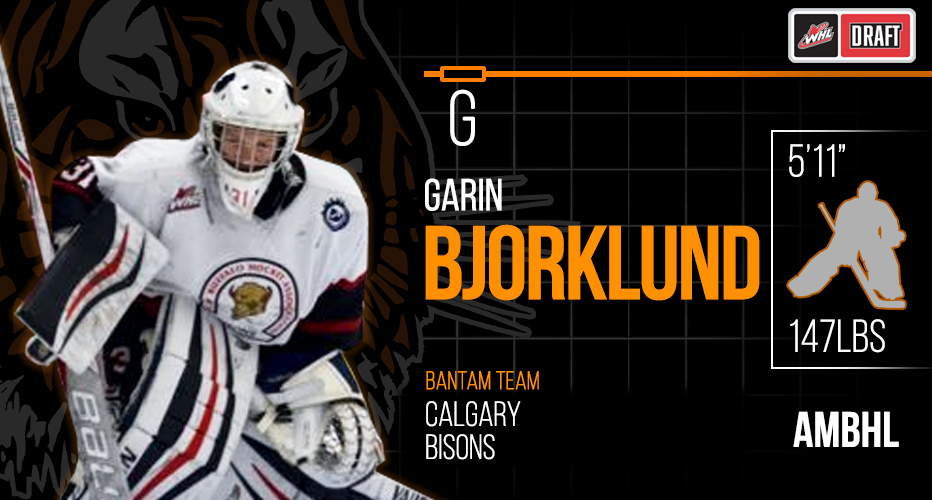 Medicine Hat, AB — The Medicine Hat Tigers were looking to continue to stock the cupboard on Thursday morning, heading into the 2017 Bantam Draft. The Draft marks players from Western Canada and Western United States born in 2002 having the opportunity to be selected.

With the 21st overall pick the Tigers selected a goaltender in Garin Bjorklund from Grande Prairie, AB. Bjorklund is a 5’11 147lb goalie who played with the Calgary CBHA Bisons Bantam AAA, appearing in 24 games this season posting a 15-6-3 record with a 1.97 GAA and 0.918 save percentage.  Garin was selected as the Alberta Major Bantam Hockey League Top Goaltender representing the South Division for the 2016-17 season.

Bjorkland played in the Alberta Cup for the Team Calgary South appearing in 3 games and posting a 1.34 GAA and 0.960 save percentage, third best in the tournament. Garin was also a tournament All-Star with his team winning the B Final.

“Garin is a gifted athletic goalie that has tremendous quickness, we would like to welcome Garin and his family to the Tigers organization,” said Tigers Director of Player Development Darren Kruger.

Bjorklund is the 27th first round selection by the Tigers in franchise history since the bantam draft started in 1990. Bjorklund joins the likes of current Tigers Ryan Chyzowski (2015), James Hamblin (2014) and David Quenneville (2013) who were all taken in the 1st round.

Bjorlund is the first goaltender taken in the first round by the Tigers since the 2007 Draft when they selected Tyler Bunz 21st overall.