TIGERS SELECT RUBINS IN 1ST ROUND OF IMPORT DRAFT 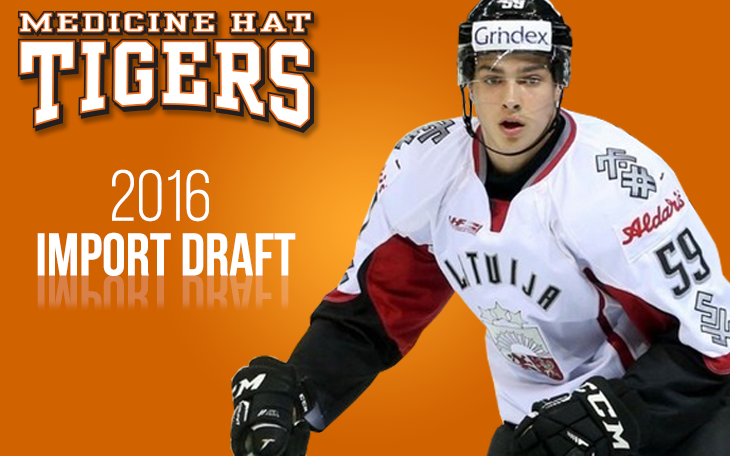 Medicine Hat, AB — The Medicine Hat Tigers were in an unusual circumstance this past season, deciding to play with no import on their roster for what was the entire 2015-16 season. With that the Tigers were able to select twice in the annual CHL Import Draft which took place Tuesday morning as all 3 leagues took part.

The held the 16th overall selection in the opening round, the highest since 2008 when the Tabbies took Tomas Kundratek with the 15th pick. The Tigers made Kristians Rubins their first choice as the 6’4 216lb defenceman hails from Latvia. Rubins played in Sweden this past season with VIK Vasteras J20 squad, appearing in 21 games and recording 11 points.

Rubins is a big body for the Tigers who has plenty of international experience to his resume, Rubins has represented Latvia at the World Junior Championship Division 1A for the past two years, while competing internationally in 5 straight years.

Rubins is a 1997 born skater, meaning he will be 19 years old during the season as he sports a late December birthday. Rubins was eligible for the this past weekend’s NHL Draft but was not selected as he was ranked 99th overall among European skaters.

The Tigers would like to welcome Kristians to the organization and look forward to seeing him in a jersey come the fall.

The Tigers now pick 75th overall in the Import Draft.