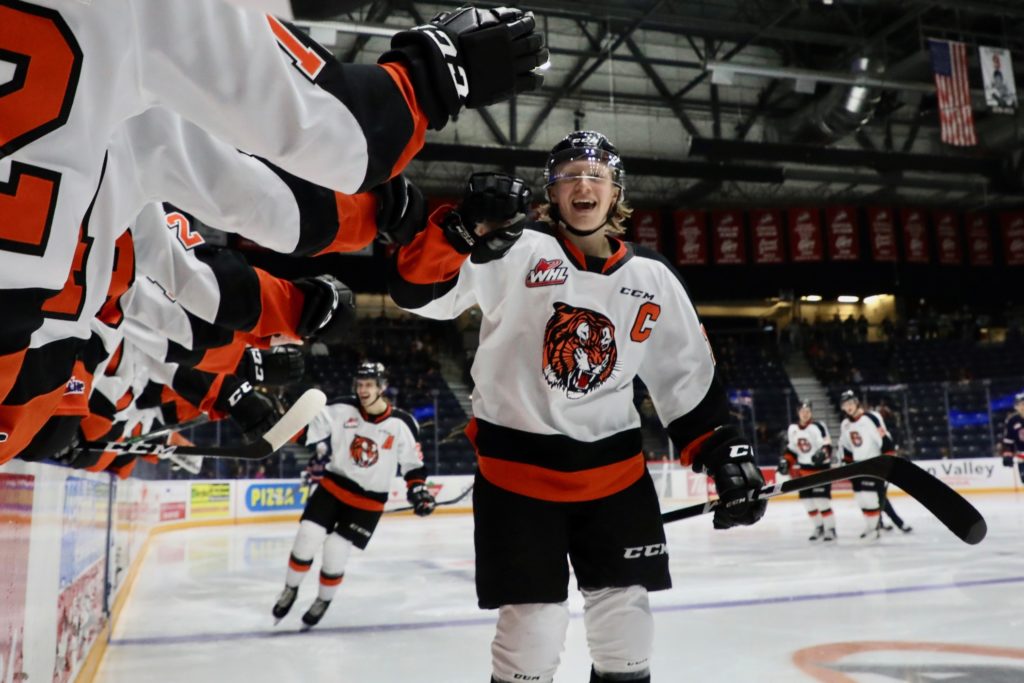 Veteran forward Elijah Brown returned to the lineup for the first time since sustaining a lower body injury in early January and he immediately made his presence known by having a three point (1G, 2A) night. Danish forward Jonathan Brinkman contributed by having his first two goal night of his WHL career in the contest. Goaltender Mads Søgaard earned his third shut out of this season stopping all 24 shots faced.

With just over three minutes remaining in the opening period, Brinkman won possession of the puck in the offensive end and did not hesitate to fire it past Pats goaltender Donovan Buskey. The Tigers headed to the dressing room leading 1-0 at the end of the first frame.

The Tabbies exploded in the second stanza by scoring four goals to extend their lead to 5-0. During their third power play of the night early in the frame, Dylan Plouffe combined with Brown to set up Captain James Hamblin to score his 33rd goal of the season.

Just over three minutes later, Parker Gavlas scored his third goal of the season on a play from Daniel Baker and Brett Kemp.

Late in the period during another man advantage for the Orange and Black, Brown scored his only goal of the night and his ninth of the season. Hamblin and Kemp assisted on the play.

Before the period ended, Brinkman scored his second of the night and 11th of the season on a play from Cyle McNabb.

In the final frame, Ryan Chyzowski scored twice to make it 7-0 for the home team. His first goal of the night was on a play from Plouffe and Brown more than halfway through the period.

With just over five minutes remaining in the game after a Pats player’s shot went wide of the net, the puck came out of the Tigers’ defensive zone where Chyzowski collected it and carried it down the ice to score his second of the night and 25th of the season.

Belluk stopped nine of 11 shots faced in the final frame.

The Tigers are now 34-16-2-1 and they will travel to Edmonton to battle the Oil Kings on Saturday night before returning home to host the Winnipeg ICE Monday afternoon. Monday’s game will be brought to Gas King and tickets for the game can be purchased at the Canalta Centre Box Office or online.