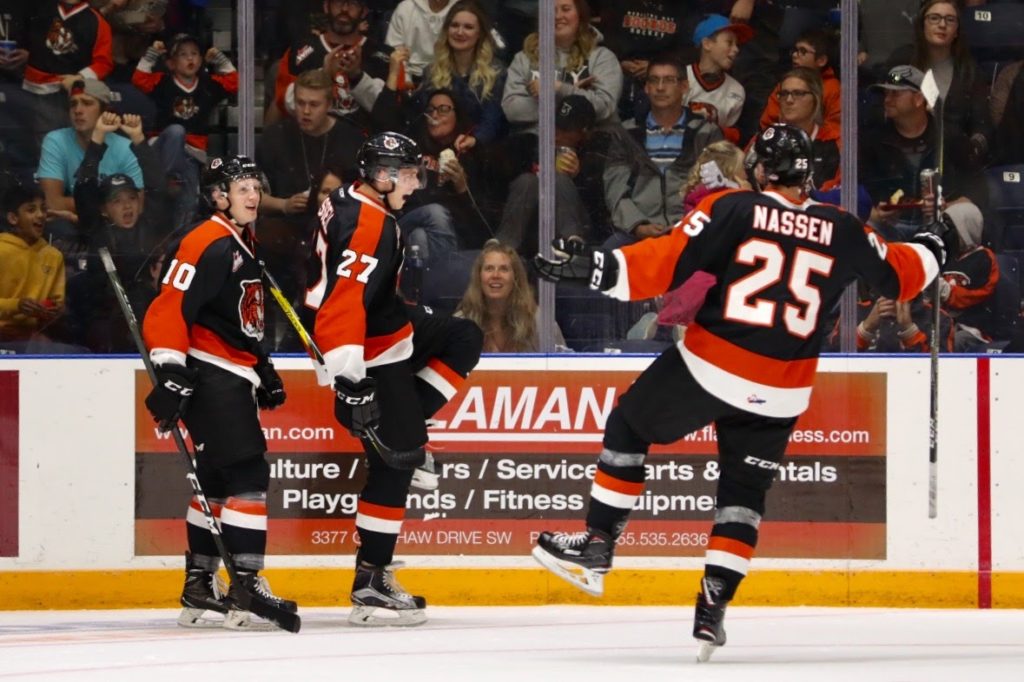 Medicine Hat, AB — The Medicine Hat Tigers dropped the opening game in the windy city by a score of 5-2. Tonight they were looking to even up the series in front of a packed house of over 4600 fans. At the other end of the rink, the Lethbridge Hurricanes were looking to spoil the party. Michael Bullion got the start playing in back to back games as was Canes goaltender Stuart Skinner.

Medicine Hat was looking to ride the energy of a packed Canalta Centre, as they pushed the pace in the first period. James Hamblin would find some open ice, making a nice power move towards the front of the net. Stuart Skinner would slide across and make an excellent pad save to keep the game scoreless.  That would be just the start of a busy opening period for Stuart Skinner. As 14 shots would be fired his way. Skinner would turn aside all of them. The Tigers stingy defense would hold the Hurricanes to only 4 shots after 20 minutes.

In the middle frame, the Tigers offense would take over. Ryan Jevne would set up Ryan Chyzowski on a 2 on 1 beating Skinner to break the tie just 1:20 into the 2nd.  A few minutes later Josh Williams would get in on the scoring as his first shot was stopped by Skinner, the puck would make its way back around to Josh as he puts it into the open cage to take a 2-0 lead. Mark Rassell and David Quenneville would pick up helpers on the Williams tally. Brady Pouteau would get caught for cross-checking putting Medicine Hat on a power play.  On the ensuing power play, the Tigers offense would continue to surge. Mark Rassell would bat the puck out of mid-air, while coming back down the puck would deflect off a defender and get past Skinner. Medicine Hat would continue to pile shots towards the opposing teams net outshooting Lethbridge  31-12 after 40 minutes of play, taking a 3-0 lead into the final frame.

Much like in the first, the Tigers great defensive effort would continue to frustrate the Hurricanes offense. The defence would limit the scoring chances, and clog the passing lanes which kept the front of the net clear for Michael Bullion. Lethbridge would pull the goalie down by 3 looking to make something happen. Max Gerlach would put this game on ice as he would hit the empty net for his 1st of the season. Michael Bullion turned aside all 22 shots he faced, recording his first win of the season and his 4th shutout as a member of the Tigers. Medicine Hat would go on to blank the Hurricanes 4-0.

For the 3rd straight season, these rivals would split the opening series.

Medicine Hat will now go on a 2 game mini road trip through the Eastern Divison. First, they will be in be Saskatoon on Friday, September 29th to battle with the Blades, then they will travel north to Prince Albert to take on the Raiders on September 30th.