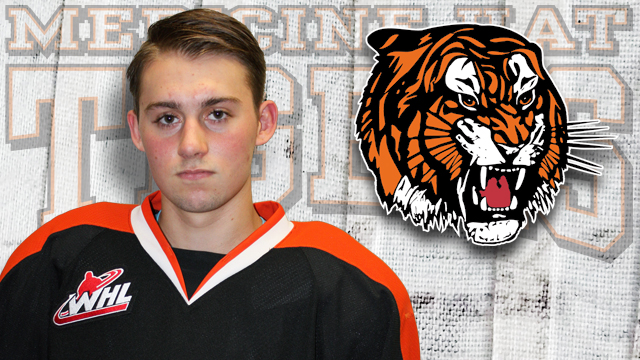 Medicine Hat, AB — The Medicine Hat Tigers have signed another prospect this off season in Flower Mound, Texas native Max Gerlach. The 17 year old forward was a 6th round Bantam Draft pick in 2013 (120th overall).

“We are thrilled that Max has decided to join the Tigers” stated General Manager and Head Coach Shaun Clouston.

Last season Gerlach played with the Colorado Thunderbirds U16 team recording 42 points in just 21 games, including 24 goals. Max also represented the USA at the 2014 U17 Five Nations Tournament held in Crimmitschau, Germany scoring 4 points in 4 games.

Senior Director of Player Development Darren Kruger likes Max’s agility and speed, “Max has a good feel for the game and possesses a dynamic skill set“.

“We look forward to Max joining our team in August and welcome him and his family to our organization,” added Clouston.

In 2007 Max was the focus of the hockey world when he made ESPN Sportscenter’s top 10 on an incredible breakaway move at the young age of 9 during an NHL game in Dallas. Check out the video here.

4:02
MERRY CHRISTMAS FROM THE TIGERS!
1 month ago