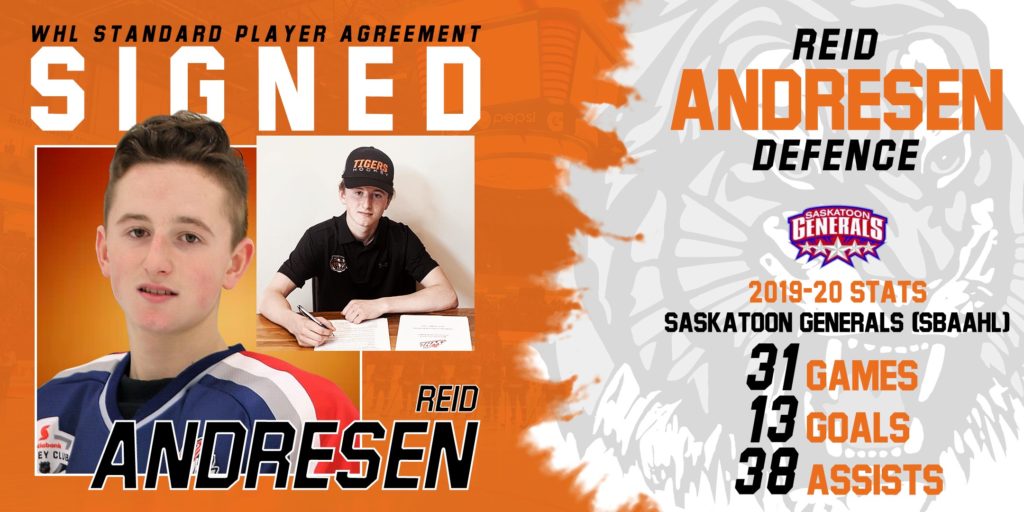 “I couldn’t be more happier to have signed with the Medicine Hat Tigers,” said Andresen. “A dream come true for me and my family. I am extremely excited for the future.”

The 15-year-old Saskatoon, SK native was drafted by the Tigers 11th overall, in the first round of the 2020 WHL Bantam Draft.

“Reid is a valuable piece for us moving forward. He is a high IQ defenceman who controls the play. He has loads of poise with the puck and he is great in transition. He is an evasive skater that can shake forecheckers, as well as, rush the puck and jump up to be an offensive threat,” said Bobby Fox, Director of Player Personnel.

During the 2019-20 season, Andresen was the Captain of the Saskatoon Generals Bantam AA of the Saskatchewan Bantam AA Hockey League (SBAAHL) and collected 51 points (13G, 38A) in 31 games played. The Generals finished the shortened 19-20 season in third place in the North Division with a 22-7-0-2 record.

“We are excited to sign Reid, our first round pick. He is a young player with exceptional talent that sees the ice well. He is certainly going to be a guy we see being a key part in our future,” said Willie Desjardins, General Manager and Head Coach.

The Tigers would like to welcome Andresen and his family to the organization.