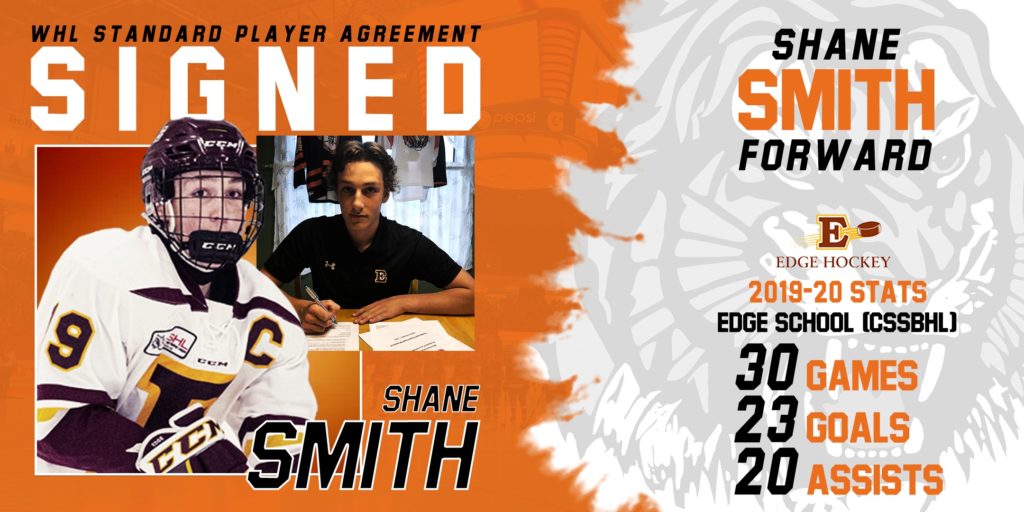 “It’s an honour to sign with such a great organization. I would like to thank my coaches, teammates and family for their continued support. Now I have to keep working hard and developing so I can one day be the player that they know I can be,” said Smith.

The 15-year-old Cessford, AB product was drafted by the Tigers in the third round, 51st overall in the 2020 WHL Bantam Draft.

“Shane is a 200 foot forward that works extremely hard on both sides of the puck. He has a nose for the net and he will go to the tough areas to score. He is an all-round valuable team guy,” said Bobby Fox, Director of Player Personnel.

Smith may be familiar to Medicine Hat fans since he played for the South East Athletic Club (SEAC) Tigers Bantam AAA team in the Alberta Major Bantam Hockey League (AMBHL) during the 2018-19 season before transferring to the Edge School Bantam Prep team in the Canadian Sport School Bantam Hockey League (CSSBHL) for the 2019-20 season. The Edge School finished the season with an 11-9-6-4 record and Smith contributed 43 points (23G, 20A).

“Shane is another player out of our area that has had a very successful hockey career so far. He was highly rated by our scouts and he is a player we will be excited to see in a Tigers uniform,” said Willie Desjardins, General Manager and Head Coach.

The Tigers would like to welcome Smith and his family to the organization.