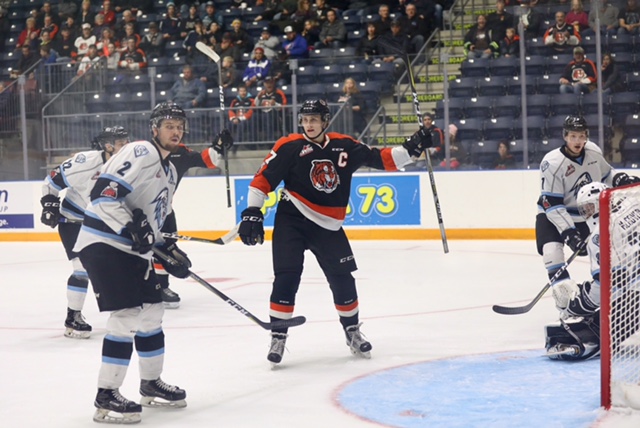 Mark Rassell added a hat trick to his growing list of early-season accomplishments on Tuesday night at the Canalta Centre.

The Medicine Hat Tigers captain scored a pair in the first period before completing his first hat trick of the year in the third to lead his team to their fifth straight win in a 4-1 victory over the Kootenay Ice.

Ryan Jevne kicked off the scoring with his fifth of the year. The 19-year-old winger took a cross-ice feed from Ryan Chyzowski off the skate then fired the puck through Ice goaltender and former Tiger Duncan McGovern to give his team an early lead.

Mark Rassell kept the pressure on two minutes later by deflecting a Dalton Gally point shot past McGovern. The play went to a review, but it was determined Rassell’s stick was below the cross bar when he made contact with the puck and the goal stood.

The 20-year-old Calgary product went right back to it three minutes later, drawing a penalty shot and beating McGovern clean on the ensuing chance with a low shot to the glove side. It was the third consecutive game in which Rassell scored on a former teammate after potting three on Calgary Hitmen goaltender Nick Schneider over the weekend’s home-and-home set.

But Kootenay mustered a response in the dying seconds of the opening period. Ice winger Sebastian Streu was credited with his second career goal after chipping a puck past Tigers netminder Jordan Hollett with just three seconds left on the clock.

The goaltenders tightened things up in the middle frame. Hollett and McGovern both closed out the second with 10 saves apiece to preserve Medicine Hat’s two-goal lead entering the third.

Rassell completed the hat trick with seven minutes left in the third by firing a rebound past McGovern for his team-leading 20th goal of the season.

While Kootenay amped up the pressure in the third and directed 13 pucks on Hollett in the frame, the 18-year-old netminder stopped every one — for a total of 30 in the contest — to lock up the victory and push Medicine Hat to 13-6-0-0 on the year. McGovern took the 23-save loss, dropping Kootenay to 8-12-1-0.

Rassell has collected 11 points through his last four games for a total of 29 on the season.

Tigers centre James Hamblin was missing for a second straight contest. The 18-year-old Edmonton product is day-to-day after tweaking his knee in Friday’s 4-2 win over the Calgary Hitmen.