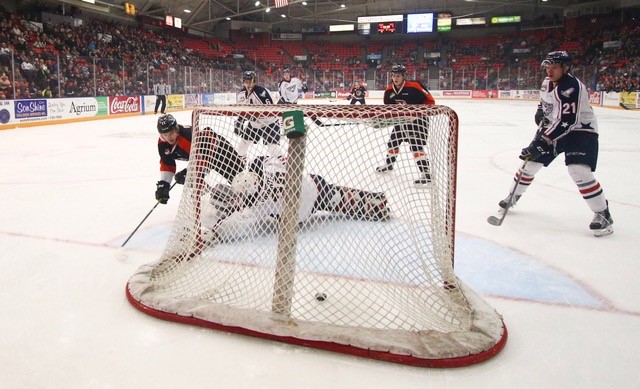 Kennewick, WA –– It was the finale of the US Division biannual trip for the Medicine Hat Tigers as they headed into Saturday night’s game against the Tri-City Americans having dropped 4 straight to south of the border teams. Friday night the Tigers got away from their game in Spokane resulting in their 5 game win streak snapped. Saturday was different as Medicine Hat got some good goaltending early and their offense clicked at the right time in order to finally pick up a win within the Division.

It was all Tigers in opening period as they would score three times and Nick Schneider was solid in goal as the Tigers took the early lead. Matt Bradley continued his torrid pace scoring his 24th of the season to open the scoring. Steven Owre joined the party with his 19th of the season. With one more goal Owre will become the 8th player on the Tigers with 20 or more goals on the season. Finally Max Gerlach scored his 30th of the year, marking back to back seasons with 30 goals on the season and matching his career high. Bradley, along with Jordan Henderson recorded 2 points in the period as Medicine Hat left the first period with a 3-0 lead.

There was a big push back from the Americans to start the second and the Tigers looked for some momentum back and they got some when Jordan Henderson took on tough customer Dalton Yorke in the fight at centre ice. Henderson took exception to a big hit by Yorke on Henderson himself and took matters into his own hands. Henderson gave up about 4 inches in height but the BC native held his own in the short tussle. The momentum looked to switch to the Americans but an additional penalty to Henderson led to James Hamblin’s 15th of the season and a 4-0 lead. Tri-City did finally solve Schneider later in the frame and closed in on a 4-2 Tiger lead after 40 minutes.

The third was intense as the Tigers looked to hold on. Tri-City was well rested heading into the game as Saturday’s game was their only one of the weekend and had a bit more legs than the Tigers down the stretch. Mason Shaw however would score his 20th of the season in the final period, a crucial goal which made the game 5-2. Schneider, alongside Clayton Kirichenko, Shaw and Krisitians Rubins killed off a long 2 minute and 20 second 5 on 3 power play as the Tigers blocked everything they could and Schneider gobbled anything without hesitation, leaving the game 5-2 heading into the final 5 minutes. The Americans however scored twice in those final minutes to come within one. But Bradley would seal the deal with an empty netter, his 25th of year, eventually leading to the 6-5 victory.

Medicine Hat will now have a few days off and get back to work Wednesday night against the Prince Albert Raiders at the Canalta Centre before a pair of weekend games against Calgary and the Lethbridge Hurricanes.