TIGERS START WEEKEND OFF WITH 6-2 WIN 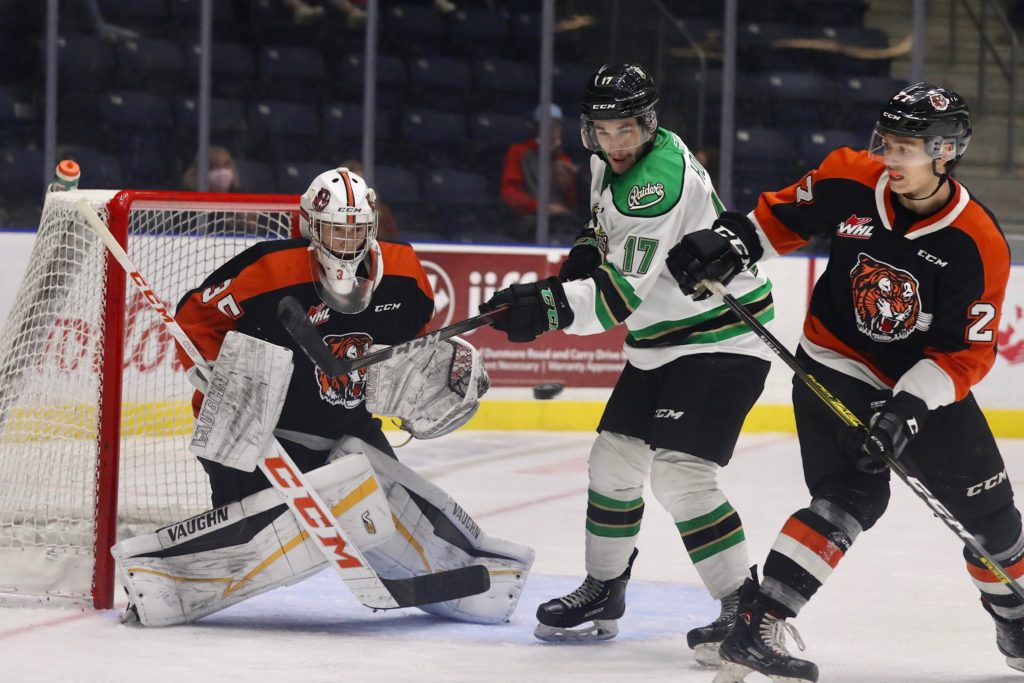 The Tigers and the Prince Albert Raiders renewed their rivalry on Friday night in Medicine Hat. The two teams faced off last weekend in Prince Albert with the Raiders coming away with the 3-2 win in the shootout. The Tigers were looking to even up the season series with a big win on home ice. The game also featured a battle between two brothers with the Tigers Oasiz Wiesblatt facing off against his older brother Ozzy for bragging rights.

The Tigers came out firing putting up 19 shots in the first period. Their aggressive play would pay dividends with them taking the early lead midway through the first. Tyler MacKenzie lifted the stick of a Raider defenceman as he came around the net. The puck came loose and Oren Shtrom was there to put it away for his second of the season. The Raiders would even the score a few minutes later though when Dallyn Peekeekoot intercepted a pass and scored his first of the season.

The Raiders jumped out to a lead early in the second period. Hayden Pakkala put home his first career WHL goal off of passes from Landon Kosior and Tyson Laventure. The Tigers would take control from that point on though. Oasiz Wiesblatt redirected Daniel Baker’s point shot for his first of the season. Shtrom picked up the secondary assist on the power play marker. The Tigers power play would get another chance a few minutes later and this time it was Teague Patton that etched his name on the scoresheet. Patton put home the loose puck after a battle in front of the net. Wiesblatt and Shtrom got the helpers on Patton’s second of the season. The Tigers would strike once more before the end of the middle period. Steven Arp put home the rebound off Brayden Boehm’s shot for his first career WHL goal. The goal gave the Tigers a comfortable 4-2 lead heading into the third.

The Tigers power play continued clicking in the final frame. Owen MacNeil found Corson Hopwo with a beautiful cross crease feed for Hopwo’s second of the season. Lukas Svejkovsky also picked up the assist on the power play goal. Noah Danielson gave the Tigers a commanding four goal lead late in the third. Danielson redirected Hopwo’s shot for his second of the year. Svejkovsky picked up another assist on the goal to increase his season point total to 13, which is tied for second in the league.

Tigers netminder Beckett Langkow wasn’t tested too often but was solid when he was called upon. He made 26 saves on 28 shots improve his record to 2-0-0-1 on the season.

The Tigers’ next game is Saturday, October 23rd when the Tigers travel to Edmonton to take on the Edmonton Oil Kings at Rogers Place. Game time is 7:00 (MST) and can be heard live on CHAT 94.5 FM at tigershockey.com or watched via webcast at watch.chl.ca.