TIGERS STRIKE BACK 7-3 OVER REBELS 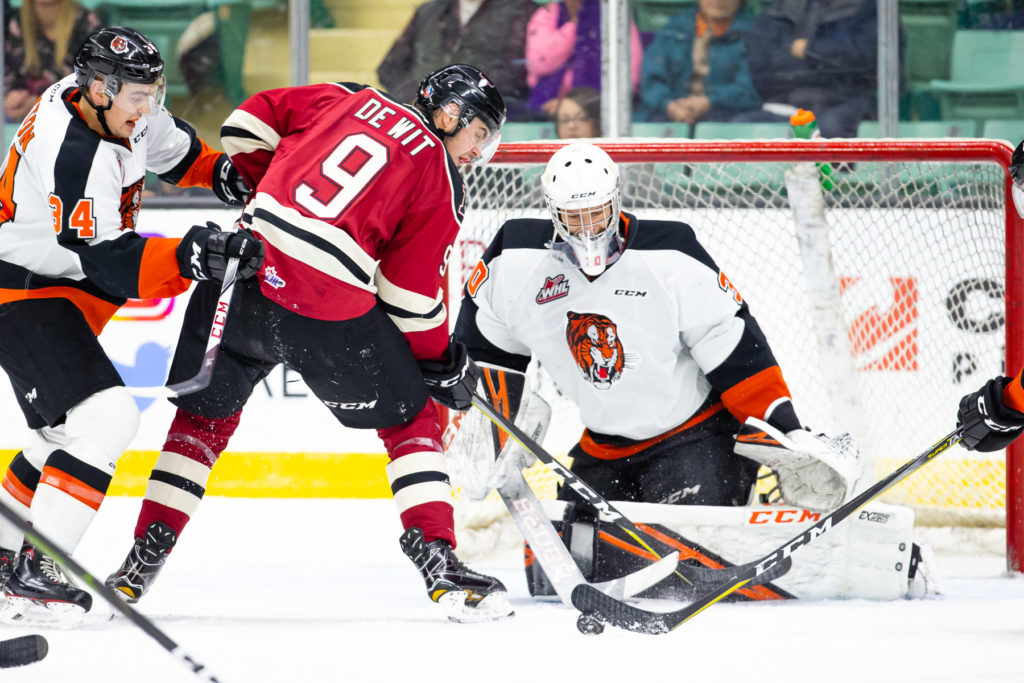 Medicine Hat, AB — After a slow start to the game, the Medicine Hat Tigers relied on their veterans to lead the team to a 7-3 victory over the Red Deer Rebels.

Bryan Lockner had his first multi-goal game scoring twice and setting up a goal. James Hamblin, Tyler Preziuso and Cole Clayton all had multi-point games as well, while goaltender Mads Sogaard stopped 25 of 28 shots.

Rebels forward Josh Tarzwell opened the scoring 1:59 into the game and Arsheep Bains followed up to make it 2-0 with less than five minutes to play. With a 2-0 deficit, Tigers General Manager and Head Coach Shaun Clouston called a strategic time out to change the momentum of the game.

Shortly after, Clayton passed the puck to Linus Nassen whose shot rebounded to Lockner. Lockner buried the rebound to rally the Tigers.

Immediately following Lockner’s goal, the Rebels used their time out.

Afterwards play was back and forth between these two Central Division rivals. Late in the frame, Hamblin fed Josh Williams a cross-ice pass and Williams used his reach to slide the puck past Rebels goaltender Ethan Anders. Williams’ goal was his 5th of the season.

Just over six minutes into the second stanza, Rebels’ Chris Douglas regained the lead for the home team.

The Tabbies continued to battle and on the forecheck Preziuso pounced on a loose puck and did not hesitate to score to make it 3-3.

Moments later as the power play expired, Clayton and Hamblin combined to set Lockner up to fire in a one-timer. Lockner’s 7th goal of the season and second of the night gave the Tabbies their first lead of the game.

In the dying minutes of the second stanza on the power play, Ryan Jevne and Dylan MacPherson set Hamblin up to score his 10th goal of the season and make it 5-3.

Byron Fancy relieved Anders from the Rebels’ net to start the third period. Anders made 15 saves on 20 shots in 40 minutes of play.

The tenacious Tigers continued to press in the final frame and once again on the forecheck Preziuso forced a turnover to score his second of the night and 11th of the season.

With less than 10 minutes remaining in regulation, Logan Christensen fed the puck to Lockner who fired it in on Fancy. Trevor Longo was there to redirect the shot and score. Longo sealed the 7-3 victory for the Orange and Black with his 2nd goal of the season.

Medicine Hat is now 11-12-1-2 and will host the Red Deer Rebels Wednesday night at the Canalta Centre. The game starts at 7 PM and the Santa Claus Fund will be in the Hut 8 Mining Community Corner.