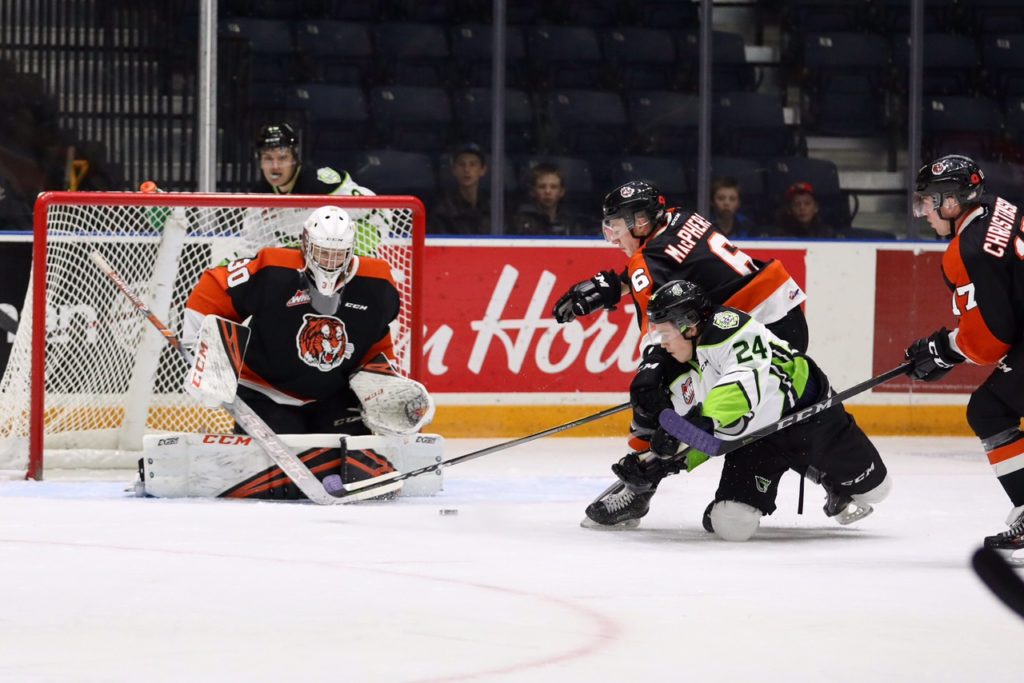 Sogaard turned aside 41 of the Oil Kings’ 45 shots to set a new career high in saves.

The game was a scoreless affair until midway through the second period when Oil Kings veteran forward Brett Kemp scored on the power play to break the stalemate.

Shortly after, Ryan Chyzowski won the draw in the Oil Kings’ end and Ryan Jevne picked up the puck to fire it in over the glove of netminder Dylan Myskiw. Jevne’s sixth goal of the season sent both teams to the dressing room tied 1-1 after two periods.

Longo struck first for the Tigers in the final frame, shooting the puck in through traffic to score his first goal and give the home team the lead. Linus Nassen and James Hamblin assisted on the play.

Unfortunately, the Oil Kings scored two back to back power play goals to gain a 3-2 lead. The goals came from Vince Loschiavo and Andrei Pavlenko.

The Tabbies continued to pressure to find the equalizer and it paid off on the power play when Hayden Ostir buried Josh Williams’ rebound. Dylan MacPherson contributed to Ostir’s 7th goal of the season.

Early into overtime, Kemp scored his second goal of the night to win the game for the visitors.

The Tigers are now 9-8-1-2 and will depart on a 4 game in 5 days Eastern Conference road trip starting Tuesday night in Saskatoon. The next home game for the Orange and Black will be November 23 vs the Prince Albert Raiders at 7:30 PM.