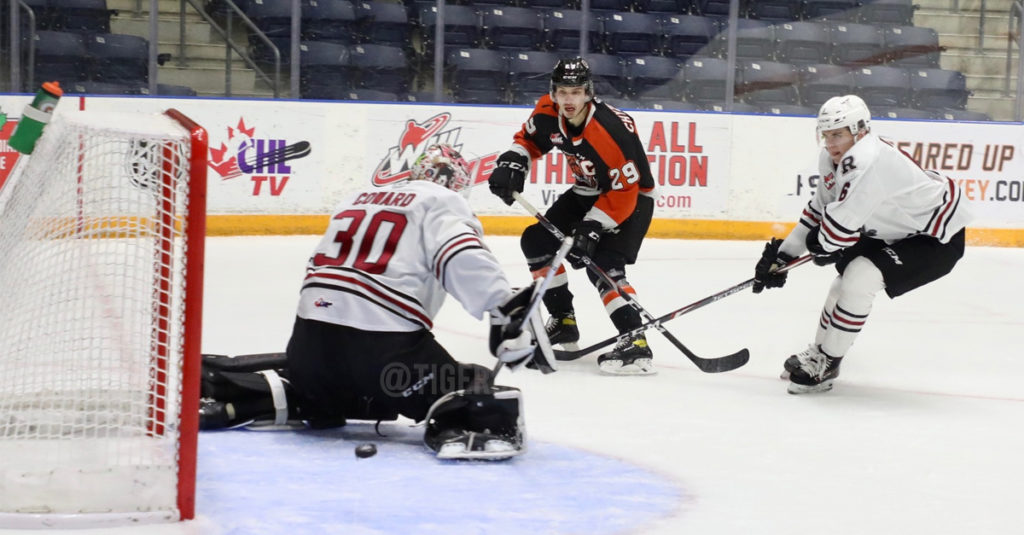 Medicine Hat, AB —  The last game in this series with the Red Deer Rebels will be a test for the back up net minders from both teams. Chase Coward will backstop for Red Deer and Beckett Langkow will be in the net for the Tigers.

Red Deer seemed to be the better team to start the 1st period, with some good quality chances but couldn’t find the back of the net.  The Bengals took a pair of back to back penalties but the Tigers’ saving grace was their penalty kill.  There were some excellent end to end rushes by both teams.  During one of the scoring chances, Brett Kemp was cross checked by Joel Sexsmith.  Ryan Chyzowski took full advantage of the penalty and scored his 8th of the season with an accurate wrist shot.  Red Deer shifted to another gear and put on the pressure.  It was then that the Tigers had a lapse in judgement, and a shooting lane opened for the Rebels. Dallon Melin would make no mistake as he potted his 2nd of the season and made it a 1 -1 score at the end of the 1st.

Neither team would disappoint in the 2nd period.  Both were playing well and there was a lot of back and forth but it would be the Tigers who turned up the heat and kept Chase Coward very busy with a flurry of shots.  Persistence paid off, when Rhett Parsons who has really stepped up his game, scored his 1st career WHL goal to put the Tigers up by 1.  He was able to grab a deflection and put it in the back of the net.  With Parsons goal, the game’s intensity rose, with both teams pushing for their next marker.

There was a lot of icing and off sides during the beginning of the 3rd, with the Rebels working hard to get the tie.  Both Coward and Langkow, who have promising futures, played an awesome game.  At 9:28 of the 3rd, Oren Shtrom scored his 4th of the season on an unbelievable pass from Brett Kemp.  Van Impe then took a cross checking penalty, and the Rebels who had only 1 goal on the power play against the Tigers, pulled out all the stops.  It would be Chris Douglas with his 5th of the season, making it a 3 – 2 game.  Red Deer played hard and gave it their all right to the end of the game, but it was the Tigers who swept the series.