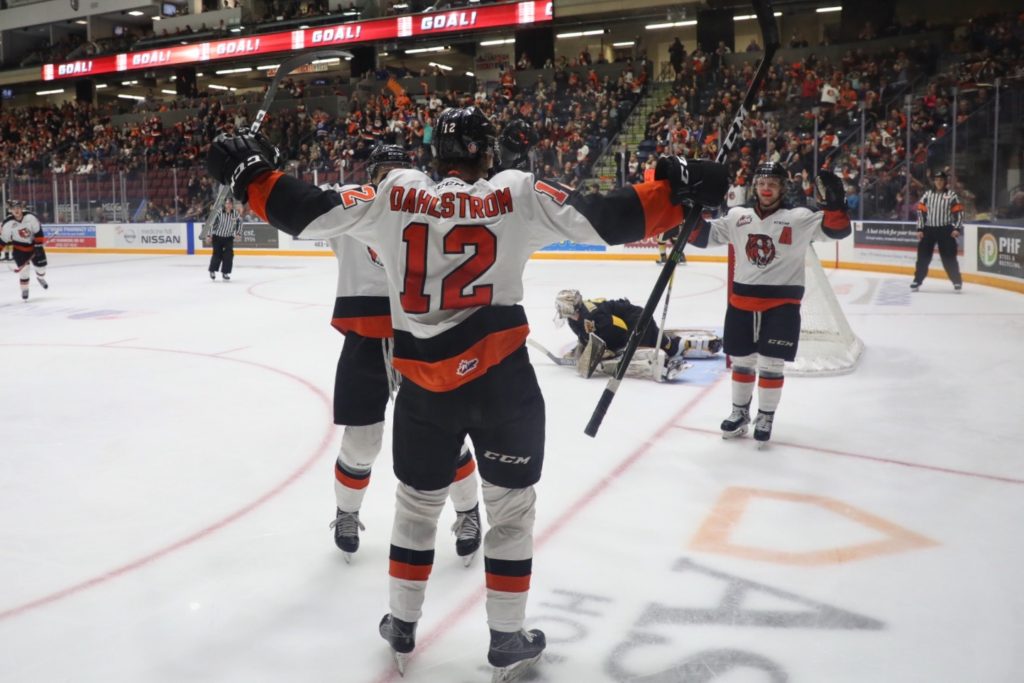 The 19-year-old Medicine Hat Tigers enforcer scored twice while keeping the Wheat Kings on their heels with his bruising brand of play to help secure a 5-3 victory at the Canalta Centre and a 2-0 lead in the WHL’s Eastern Conference quarter-finals.

Fischer found the board at the tail of a physically-wrought opening frame, catching just enough of a David Quenneville rebound to fool Brandon goaltender Logan Thompson for the evening’s opening marker, but he didn’t stop there.

The Lloydminster product continued his contributions in the second period by dropping the gloves with Brandon’s Kade Jensen in the first fight of the series — erupting after Fischer laid heavy check into the end boards on Wheat Kings forward Reid Duke.

The bout didn’t come with a clear victor, but it seemed to spark something on the Tigers bench.

While the Wheat Kings managed to tighten up their special teams after being exploited for four power play goals on nine chances in Game 1 — keeping Medicine Hat’s offence at bay through a pair of early infractions — the Tigers broke through shortly after Fischer’s bout.

Max Gerlach was waiting on the doorstep to smack in his first career playoff goal just seven seconds into Zach Russell’s minor for roughing, giving the Tigers some vital insurance heading into the final frame.

Fischer struck again early in the third period, beating Thompson for his third marker in two nights. While Wheat Kings centre Connor Gutenberg mustered a response a few minutes later — snapping Michael Bullion’s bid for a shutout on their 17th shot of the game — any jubilation on the Brandon bench was immediately snuffed out.

It only took nine seconds for John Dahlstrom and Mason Shaw to answer back, with Shaw feeding the big Swede for his first career playoff goal to push the lead back to three.

Duke scored again for Brandon midway through the final frame, though the Wheat Kings quickly ran into a sizeable problem in their own crease.

With just over six minutes left in regulation, Gerlach fell onto Thompson, causing an apparent leg injury for the Wheat Kings goaltender. Thompson left the game in favour of Travis Child after stopping 38 shots.

The Wheat Kings weren’t ready to call it a night though. Forward Tyler Coulter took advantage of a fortuitous bounce by slapping a rebound past Bullion to cut Medicine Hat’s lead to one, but Dahlstrom iced the game with an empty-netter to send the Tigers to Dauphin with a two-game lead.

Bullion finished with 20 to improve to 2-0 in the post-season.

The Tigers and Wheat Kings take the series to Dauphin’s Credit Un for Games 3 and 4 on Tuesday and Wednesday, respectively.