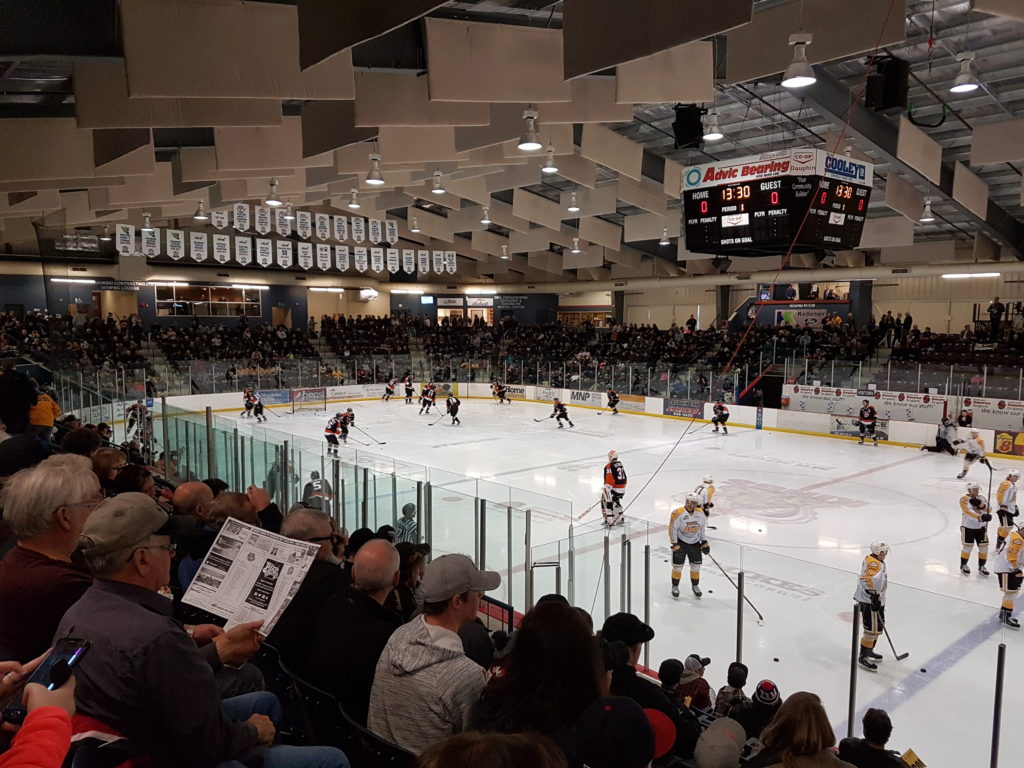 Dauphin, MB — In what was a crucial game for the Medicine Hat Tigers Tuesday night as the series shifted to Dauphin, Manitoba for Games 3 and 4. The Wheat Kings held their own throughout the opening periods, sticking around as much as possible and playing a very physical game. The Tigers didn’t let their opposition get to them and ended up continuing their pressure on Logan Thompson. The pressure mounted and Medicine Hat proved to be the victors with a strong third period.

The Tigers have scored first in the first two games the series. Game 3 was no different as Steven Owre buried his 1st of the post season 7 minutes into the game. Medicine Hat held their own in the opening period with a mostly Wheat King fan base in attendance. There were however a few Tiger fans in the stands cheering on their boys amidst a sea of yellow and black. Medicine Hat got a good period from Michael Bullion. The Alaskan goaltender stopped some big shots, some point blank and took a 1-0 lead into the intermission.

In the second period the Wheat Kings got on the board. 2001 born Ben McCartney scored his first ever WHL goal, sliding a puck past Bullion on a rebound for a 1-1 game. John Dahlstrom answered moments later with a “plays of the week” type goal, dangling his way to the net and past Thompson. Just over a minute later the Wheat Kings answered back on a 4 on 3 power play, Reid Duke scored with a one timer from the side wall and head into the break tied at 2.

Clayton Kirichenko had a great game for the Tigers, sparking energy from the opening faceoff. The big captain laid out numerous Wheat Kings trying to come across the middle and playing a stifling game. The third period started with a Mark Rassell power play goal banging in a rebound from the side of the net and a 3-2 for Medicine Hat. Rassell’s goal was just the beginning of a big third period for Medicine Hat. Just over a minute after the Rassell goal Chad Butcher got a gift from Thompson in front of the net. The Wheat Kings goaltender made a save off a point shot and dropped the puck in the crease. A driving Chad Butcher flipped the puck over Thompson and increased the lead to 4-2. The momentum tilted after the goal as Medicine Hat took over the game. Matt Bradley stole the puck from a Wheat Kings forward and raced into the Brandon end. A driving Ryan Jevne beat his man back to the front of the net and Bradley found the Edmonton native with a great pass and a 5-2 lead.

With a big lead the Tigers shut the door as a big team effort lead to a 6-2 victory.

The series resumes in Dauphin with Game 4 Wednesday night.