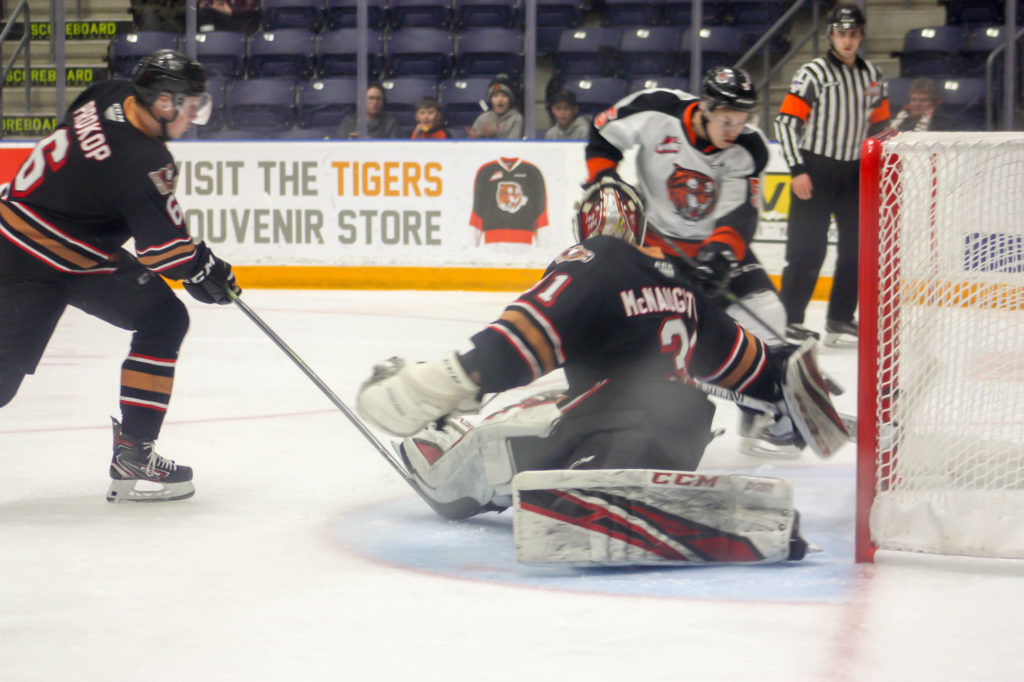 Medicine Hat, AB — The Medicine Hat Tigers won their first game of the new decade at home by defeating the Calgary Hitmen 5-2 on Friday night.

The Tigers and the Hitmen met three times this past week with the home team coming out on top in each contest. Medicine Hat won 3-1 December 28th at the Canalta Centre before falling 4-2 at the Saddledome on new year’s day and finishing the week off by winning 5-2 tonight.

Captain James Hamblin scored a pair of goals including his 100th career WHL goal in tonight’s contest while veteran forward Elijah Brown added a pair of his own.

Brown capitalized on the Tigers’ second power play of the night to score the first goal at home of the new decade early into the opening frame. Brown’s goal was assisted by Ryan Chyzowski and Brett Kemp.

Just over three minutes later, Hamblin scored his first of the night on a play from Corson Hopwo and Lukas Svejkovsky.

Early in the second stanza, Hamblin lit the lamp for a second time scoring his 21st goal of this season and the 100th goal of his career. For the fourth year in a row, Hamblin has scored 20+ goals for the Tigers. His second goal of the night was assisted by Hopwo.

Midway through the frame, Brown intercepted the puck and sped away on a breakaway to score his second of the night and eighth of the season giving the home team a 4-0 lead.

Shortly after Brown’s goal while the Hitmen were on their first power play of the night, Carson Focht scored to cut the Tabbies’ lead to 3. Medicine Hat headed to the dressing room leading 4-1 after 40 minutes of play.

In the final frame, Parker Gavlas played the puck to Bryan Lockner at the side of the net and Lockner sent a beautiful pass across to Jonathan Brinkman who buried the puck into the net to score his eight goal of the season.

The Hitmen responded with a goal of their own quickly after Brinkman’s. Veteran forward Blake Allan scored the Hitmen’s second goal of the night.

Tigers goaltender Mads Søgaard stopped 20 of 22 shots faced in the contest to earn his 13th win of the season while Hitmen netminder Jack McNaughton allowed 5 goals on 37 shots faced.

The Tigers are 24-11-1-1 and they will return to action tomorrow night when they host the 14-19-2-1 Seattle Thunderbirds. Saturday’s game will be brought to you by 20/20 Vision Care and tickets can be purchased in person at the Canalta Centre Box Office or online.