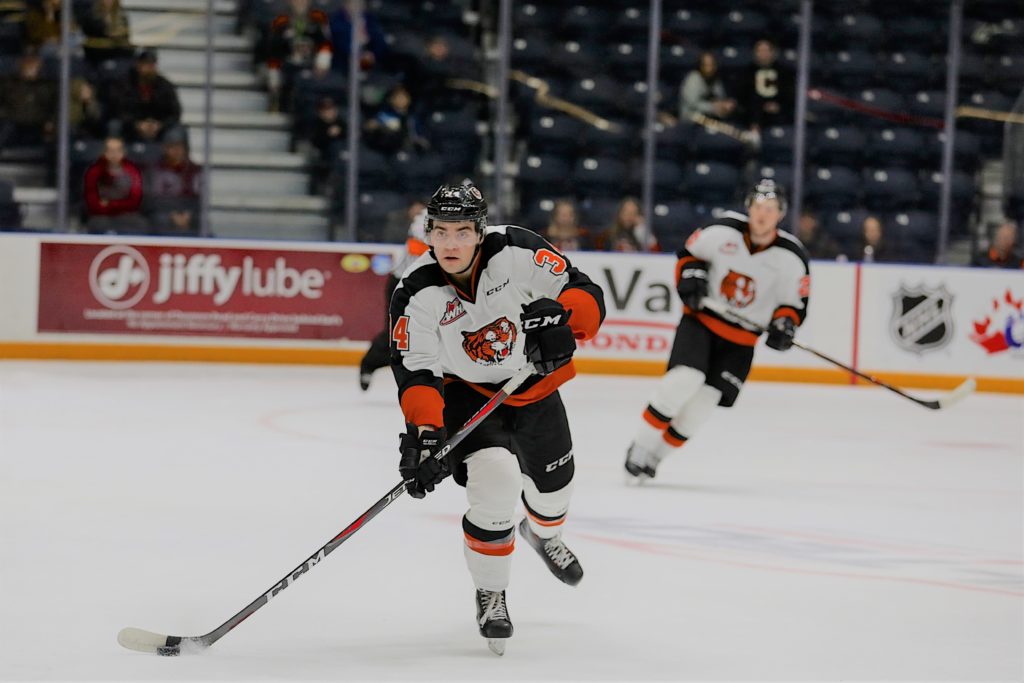 Medicine Hat, AB — The Medicine Hat Tigers paid a visit to the Brandt Centre where they defeated the Regina Pats 6-2.

Ryan Chyzowski and Cole Sillinger combined on three of the Tigers’ six goals while rookie goaltender Garin Bjorklund stopped 22 of 24 shots faced. Bryan Lockner made his 200th career WHL appearance in the Tabbies’ victory and picked up his first assist of the 2019-20 campaign.

Although the Pats opened the scoring early in the game when Carter Massier scored his first of the season, the Tigers did not let them hold the lead long. Midway through the frame while on the Tigers’ second power play of the night, Sillinger fired the puck past Pats’ Max Paddock to tie the game up. James Hamblin and Chyzowski combined on Sillinger’s goal.

Chyzowski benefited on the Tigers’ next man advantage by beating Paddock with a backhand shot. His third goal of the season was assisted by Sillinger and Brett Kemp.

The Pats responded quickly with Ty Kolle scoring to tie the game up 2-2. Both teams headed to the dressing room at a stalemate after 20 minutes of play.

Early into the second stanza, the Tigers regained the lead when Lockner carried the puck down the ice and took a wide angle shot. Elijah Brown buried the rebound for his first goal of the season. Dru Krebs picked up an assist on the play.

Van Impe went on to extend the Tigers lead to 4-2 after carrying the puck up from the Tigers’ end and firing it past Paddock. Van Impe’s first goal of the season was assisted by Krebs.

Late in the second period, Caleb Willms blocked a shot and then burst forward on a breakaway to score his first career WHL goal.

In the final frame, Chyzowski dished the puck out to Sillinger who buried it into the net for his second of the night and fourth goal of the season. Cole Clayton assisted on the play.

Paddock turned aside 40 of the Tigers’ 46 shots for the Pats.

The Tigers are now 4-2-0-0 and will return home to host the 3-3-0-0 Red Deer Rebels Saturday night at the Canalta Centre. The Army Cadets will be in the CF Industries Community Corner and the game is scheduled to start at 7:30 PM. Tickets can be purchased in person at the Canalta Centre Box Office or online through Ticketmaster.