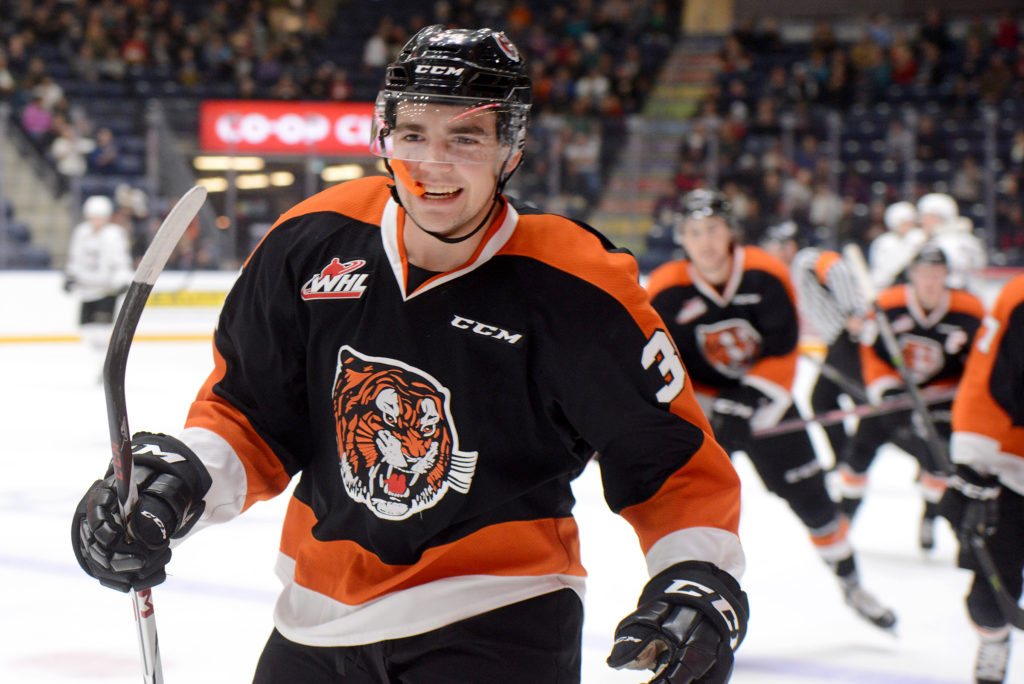 Rookie goaltender Mads Sogaard stopped 30 of the Rebels’ 31 shots and Captain James Hamblin was involved in three of the Tabbies’ four goals as they led the team to victory. Hamblin scored and picked up two assists extending his point streak to 7 (3G, 4A) in the Tigers’ last four games.

Cole Clayton scored his first goal of the season by firing the puck in from the point through traffic. Hamblin and Hayden Ostir assisted on the play.

Late in the first period, Hamblin set up Ryan Jevne whose shot was redirected by Tyler Preziuso to extend the home team’s lead to 2-0 on the power play. Preziuso now has 9 points (4G, 5A) in the Tabbies’ last five games.

Thirty-nine seconds into the second stanza Jevne passed the puck across the Rebels’ defence to Hamblin who fired a nice wrist shot under the blocker of Rebels’ Byron Fancy. Linus Nassen assisted on the play.

With less than two minutes to play, Rebels veteran forward Jeff deWit scored to cut the lead to 3-1.

In the final frame, Bryan Lockner redirected Elijah Brown’s shot on the power play to seal the 4-1 victory for the Tigers. Dylan MacPherson assisted on the play.

The Orange and Black are now 7-6-0-1 and will travel to Regina to play the Pats on Friday night before returning home Saturday to host the Moose Jaw Warriors.