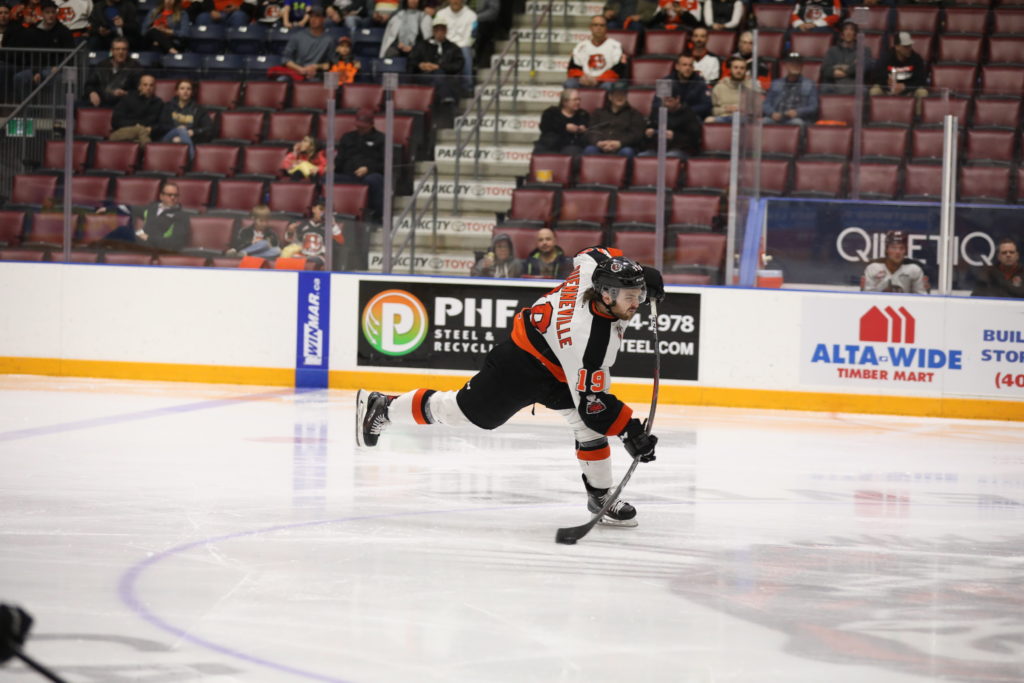 The Medicine Hat Tigers put in another strong team performance to defeat the Brandon Wheat Kings 7-3 in game two of the first round of WHL Playoffs.

Early in the first period, Ryan Chyzowski received a pass from Rassell then flew down the ice and beat Wheat Kings goaltender Logan Thompson glove side to give the Tigers an early lead.

Midway through the period, Elijah Brown passed the puck to Rassell whose shot went off Thompson’s left pad to David Quenneville. Quenneville did not hesitate to fire in a slap shot and double the Tabbies’ lead.

Less than a minute later on the power play. Brown and Bryan Lockner combined to set up Rassell. Rassell’s shot went top shelf, shortside and he sent his team to the dressing room leading 3-0 after 20 minutes of play.

Wheat Kings forward Marcus Sekundiak struck first in the second stanza to get the visitors on the board.

Nineteen seconds later, Rassell responded for the Tigers to extend the lead to 4-1. On a play from Lockner and Dalton Gally, Rassell’s smooth moves danced the puck into the net to light the lamp and pick up his second goal of the night.

Late in the middle frame on a power play, Jaeger White received a pass from Quenneville and his shot was redirected into the net by Brown.

In the third period, Wheat King forward Ty Lewis scored a short handed goal to cut the Tabbies’ lead to 5-2.

Just over a minute later, White’s shot was redirected into the net by a Wheat King defender while the Orange and Black were on the power play. White’s goal was assisted by Kristians Rubins.

Sekundiak struck again three minutes later to pick up his second goal of the night.

Thompson left the Wheat Kings goal at 15:12 in the final frame and was relieved by Dylan Myskiw. Thompson made 27 saves on 33 shots before leaving the game.

With less than two minutes left in the game, Josh Williams pounced on a loose puck in the slot and fired it home to secure the Tigers’ 7-3 victory.

The Tigers lead the series 2-0 and will travel to Dauphin, MB, to play the Wheat Kings in game three Tuesday night. The game will start at 6:30 PM MT.