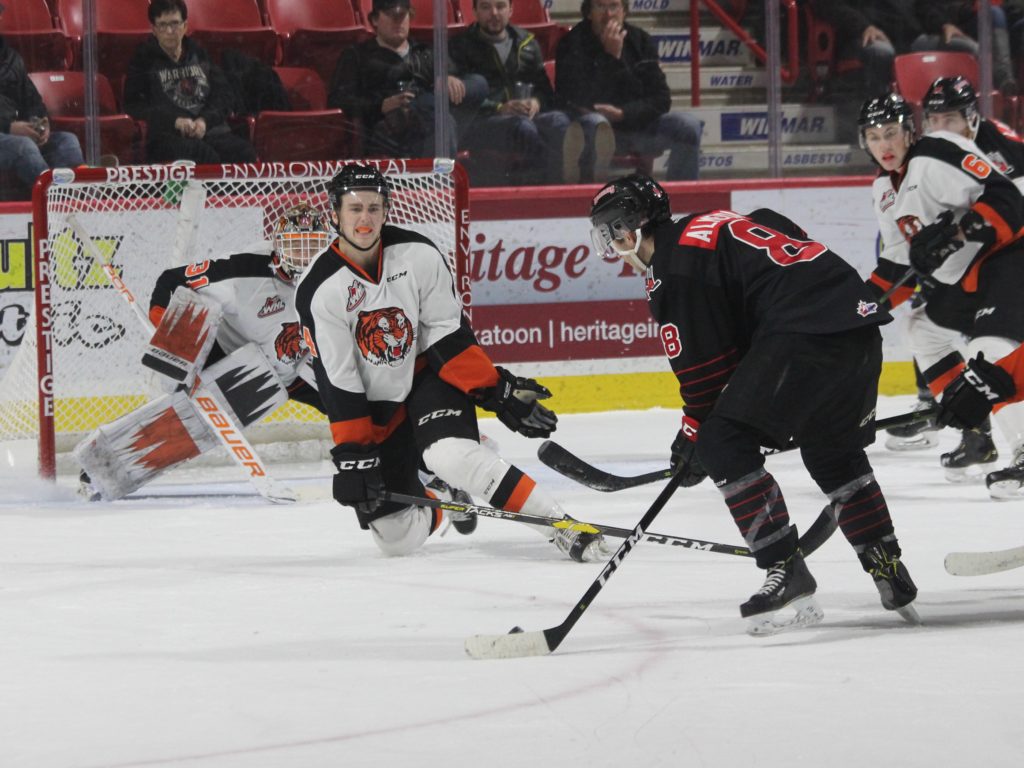 Medicine Hat, AB — The Medicine Hat Tigers close out their three game road trip with a 6-5 overtime victory against the Moose Jaw Warriors.

Ryan Jevne scored his second of the night and 12th of the season on the power play in overtime to win the game.

Warriors defenceman Jett Woo opened the scoring midway through the first frame on the power play to give the home team a 1-0 lead.

Their lead was short lived as goaltender Jordan Hollett passed the puck to Joel Craven in the Tigers’ end. Craven then skated the puck up into the Warriors’ end and fired a long shot past Moose Jaw goaltender Adam Evanoff. This was Craven’s first goal of the season and Hollett’s first WHL career point.

Jevne quickly gained the lead for the Tigers by jumping on a loose puck and burying it into the back of the net. Logan Christensen and Baker combined on the play.

Late in the period, Baker followed in a shot and tapped the rebound to make it 3-1 for the Tigers. Ryan Chyzowski and Bryan Lockner picked up the assists on Baker’s first career goal.

In the dying seconds of a wild first period, Luke Ormsby scored for the Warriors. Tabbies headed to the dressing room leading 3-2 after 20 minutes of play.

Early into the second stanza on a play from Jevne and Baker, Tyler Preziuso deflected the puck into the net to score his 12th goal of the season.

With less than 10 minutes to go in the second, Warriors Tristin Langan scored on the power play.

The tenacious Tigers continued to press and on the power play, Captain James Hamblin deflected the puck into the net. Chyzowski and Linus Nässen assisted on Hamblin’s 14th goal of the season.

Shortly after Hamblin’s goal, Josh Brook scored for the Warriors and cut the Tabbies’ lead to 5-4 before the period ended.

Keenan Taphorn was the lone goal scorer in the final frame and his goal for the Warriors sent the game into overtime.

Just over a minute into overtime on the power play Jevne scored to win the game. Chyzowski and Nässen combined on the play.

Hollett turned aside 40 of 45 shots faced while Evanoff stopped 40 of 46 shots.

The Orange and Black finish their road trip with a 2-1-0-0 record improving their season record to 14-14-1-2. The Tigers will return home to host the Regina Pats on Saturday night at the Canalta Centre. The Home Depot will be the game sponsor and the Medicine Hat Society for Prevention of Cruelty to Animals will be in the Hut 8 Mining Community Corner. The game starts at 7:30 PM.