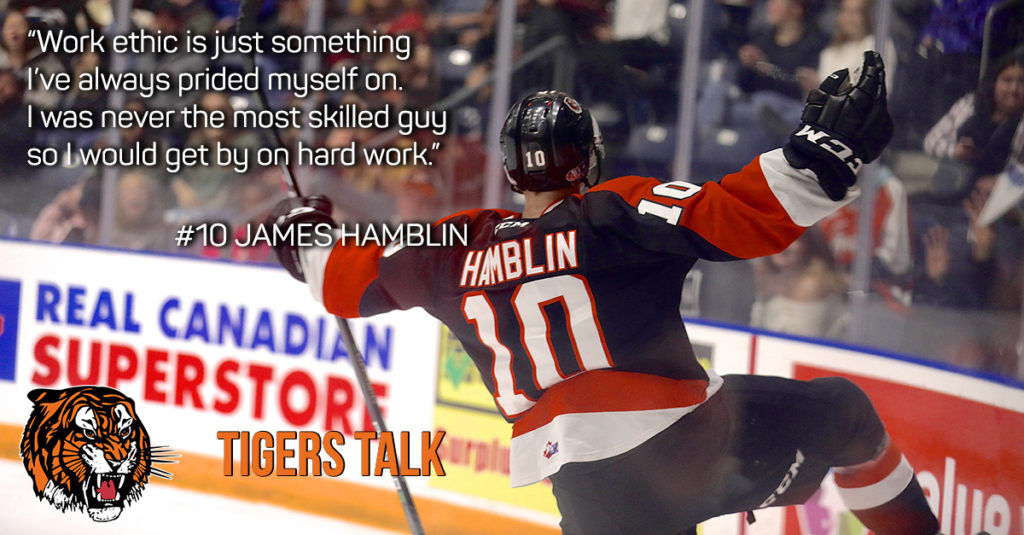 Medicine Hat, AB –  Coming into the 2018-19 season, James Hamblin set a goal to be the Captain of the 49th Edition of the Medicine Hat Tigers.

In August during the leadership retreat, Hamblin was voted captain by his teammates.

“I’m honoured and fortunate that my teammates saw me as the right fit for the spot,” said Hamblin. “With the C comes more responsibility but I’m excited to take it on and I am very lucky to have a great group of guys in the room that makes my life a lot easier.”

After realizing his goal to become the captain early, Hamblin switched his focus onto what he hopes to accomplish with the team this year.

“We have a very good team this year with a lot of upside. The goal is always to win a championship so that is what I’ll strive for,” said Hamblin.

The Tigers are currently 9-7-0-2 and play a two-game homestand this weekend before departing on a 4 games in 5 days Eastern Conference road trip next week.

The 19-year-old Edmonton, AB product was the first round pick of the Tigers in the 2014 Bantam Draft and since then he has suited up for 212 games, scoring 55 goals, picking up 82 assists for a total of 137 points to date. He credits his hard work ethic for his success.

“Work ethic is something I’ve always prided myself on. I was never the most skilled guy so I would get by on hard work,” said Hamblin.

Hamblin also added that he models his game after Pavel Datsyuk who plays a very solid two-way game.

One thing that Hamblin has focused on a lot since he started playing for the Tigers was his speed, both in decision making and with his feet. Hamblin came second in last year’s ATB Skills Competition falling to teammate Ryan Jevne in the finals for the fastest skater on the team.

When thinking back on his rookie season and how far he has come since joining the Orange and Black, Hamblin credits former linemate Mark Rassell for taking him under his wing and helping Hamblin grow into the player and person he is today. But Rassell is not the only person who inspires Hamblin.

“My mother inspires me every day to be thankful, hardworking and confident because that’s the person she was,” said Hamblin.

Look for the Captain to continue to the lead the team by example every game while he exemplifies hard work, heart and hustle this season.