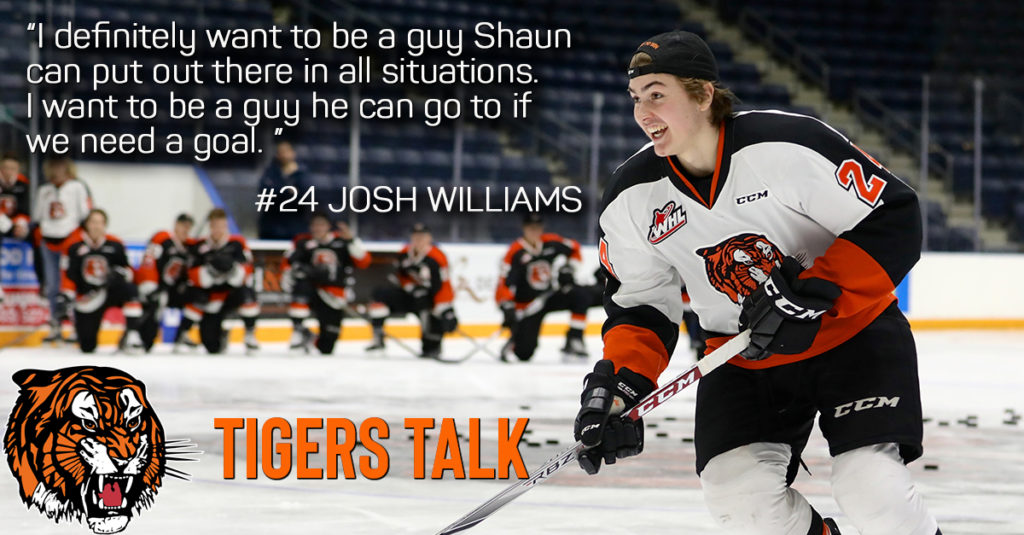 Medicine Hat, AB – Medicine Hat Tigers forward Josh Williams is looking forward to this year and building off the success of last season.

When reflecting back on the 2017-18 season, what stands out for Williams the most was the collarbone injury he sustained that sidelined him early in the season.

“When I was injured and missed 10 weeks, it was tough coming back, I had felt I lost a few steps and wasn’t happy with my game,” Williams said. “It took me longer than I expected to get my legs and timing back.”

The 17-year-old Langley, BC native produced 20 points (11 goals and 9 assists) in 47 games played. Of those 20 points, 7 goals and 8 assists came in the 33 games he played after his injury. Williams also scored two goals in the Tigers’ six playoff games.

“I play much better when I’m confident, I need to trust myself and play with confidence this year,” said Williams.

In order to help build his confidence for this season, Williams has been focusing on improving his skating and building strength. He aspires to play a bigger role on the team this coming year.

Williams was invited to the Hockey Canada U18 Camp that started July 28th and he was selected to play for Team Canada in the Hlinka Gretzky Cup. The tournament is being held in Red Deer and Edmonton, AB, from August 6th to 11th.

“It would mean the world to me, I had a chance last year but broke my collarbone the day before the tournament started,” Williams had said prior to the camp about playing for Canada.

Williams added that he was looking forward to the opportunity to represent Canada and play on the world stage against his peers. Team Canada played their first game last night against Switzerland and won 10-0. They play Slovakia tonight at 7:00 p.m. in Edmonton.

The Medicine Hat Tigers’ Main Training Camp will begin August 24th. More details about the Camp will be released closer to the date.